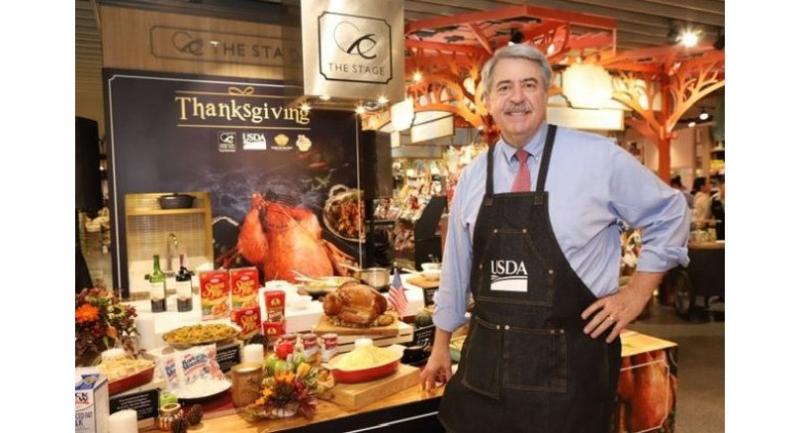 Ted McKinney, under secretary for Trade and Foreign Agricultural Affairs at the US Department of Agriculture,  promotes US turkey and farm produce to  celebrate Thanksgiving Day at Central Food Hall in Bangkok.

A senior US official is bullish about the prospects of agricultural trade between Thailand and the United States amid the China-US trade war.

Ted McKinney, the US Department of Agriculture under secretary for Trade and Foreign Agricultural Affairs, told The Nation that he was also optimistic of a solution to the US-China dispute.

“I hope it would come to a close soon,” he said.

McKinney pointed to some good signs ahead of the meeting between Chinese President Xi Jinping and US President Donald Trump later this month at the G-22 meeting.

“It is a positive thing that President Trump phoned President Xi last week,” he said on Friday.

He, however, reiterated the accusations that Chinese companies stole US intellectual property and forced US firms to transfer technology while their US counterparts did nothing of the sort.

“I believe, once we have a commitment from China to stop that kind of activities and behaviours, we can get back to the negotiation table,” said McKinney.

McKinney visited Thailand and other countries in the region as part of US government efforts to increase exports to markets in Southeast Asia.

Thailand is concerned about the impact from international trade tensions following the contraction in Thai exports in September, the first decline in 19 months.

Kasikorn Research Centre had predicted earlier that the uncertainties in global trade could lead to Thailand losing between $3.1 billion to $4.5 billion in exports next year, or 0.60.9 per cent of its gross domestic product.

McKinney, however, foresaw an uptrend in farm trade between the two countries. He promoted pre-cooked turkey and other farm produce during his visit here ahead of Thanksgiving Day later this month.

“I absolutely do see greater opportunity for our countries,” said McKinney. He also referred to US vice president Mike Pence who made clear US commitment to the IndoPacific region during the Asean Summit in Singapore.

US products will not replace Thai products, but we could supply what we have, such as turkey and some food products, he said while boasting the quality of US turkey.

Soybean is one of the top products Thailand imports from the US. China has slapped a 25-per-cent tariff on US soybean imports into the country in retaliation for US imposing tariffs on Chinese goods.

Thailand imported US$307.8 million worth of US soybean between January to September this year, a surge of 50.5 per cent from the same period last year.

Other major US imports include cotton, wheat and prepared foods while Thailand’s key export items to the US are processed fruits, rice, rubber and pet food.

Total agricultural trade between the two countries was about $4.3 billion in 2017, with the US having a deficit of nearly $616 million, according to its embassy in Bangkok.

However, total exports of US farm produce and related items to Thailand increased 17 per cent to 1.96 billion last year, from $1.7 billion in 2016.

Meanwhile, US imports of agricultural produce, fishery and forest items increased from $3.7 billion in 2016 to $3.96 billion last year.

When asked about the resumption of free trade talks between the two countries, McKinney said the timing depended on the US Trade Representative (USTR).

With regard to the proposed export of US pork to Thailand, he said it would not replace local products but offer an option to consumers looking for a wider variety of foods and tastes. “It is twoway street, we both win,” McKinney added.

As a response to Thailand’s import ban on US pork in April, the US pork industry requested that the USTR review Thailand’s eligibility for the US Generalised System of Preference (GSP) programme.

The USTR’s review of Thailand’s GSP eligibility is still ongoing, according to the US Embassy in Bangkok.