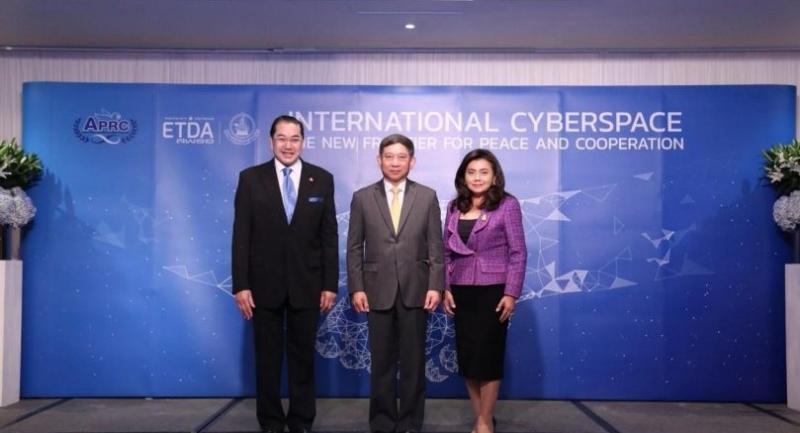 E-COMMERCE and cybersecurity, together with Internet governance and data privacy, will be key topics among Asean member states after Thailand assumes the bloc chair in 2019, says Air Chief Marshall Prajin Juntong, deputy prime minister and minister of justice.

In particular, he said, the question of balancing these dimensions and creating mutual governance to guard the cyberspace will need attention, given that Asean is home to 650 million people and 370 million Internet users. Thailand’s population is close to 70 million with over 120 million mobile subscriptions, Prajin said.

He was speaking yesterday at the “International Cyberspace: The New Frontier of Peace and Cooperation” forum held by Asian Peace and Reconciliation Council (APRC) and the Electronic Transactions Development Agency (ETDA).

Prajin noted that cyberspace has become an essential part of people’s daily lives. Nations now rely on the interconnected nature and reliability of the Internet to drive economic development and continually improve citizens’ social and economic well-being. The Internet is an essential tool to propel the economy towards a “digital economy”, a phenomenon that has relatively recently become global.

“Thailand, as part of the global economy, first embarked on this digital transformation trend in 2016,” recalled Prajin. “We placed great importance on the ‘Digital Thailand’ and ‘Thailand 4.0’ initiatives, where we developed and put in place critical support infrastructures such as fibre-optic networks and country-wide Internet connectivity to provide citizens access to essential services and up-to-date knowledge.

“‘Net-pracharat’ is a great example of the government policy to provide Internet access nationwide. The Ministry of Digital Economy and Society, in conjunction with the National Broadcasting and Telecommunications Commission, brought digital access and digital opportunities to remote villages by installing fibre-optic cables in areas where telecommunications services had limited availability, or areas with no or low commercial potential,” Prajin said.

“We may be witnessing a steep rise in cybercrime, which is causing serious damage to critical infrastructure, institutions and society,” he said.

“I believe it is time for all of us to join hands and work together to protect the cyberspace and make it safe for everyone.”

He added that in terms of legislative measures, Thailand has been preparing a national legal foundation based on the Draft Personal Data Protection Bill and the Draft Cybersecurity Bill, in accordance with global agreements and measures.

“We expect that both bills be enacted very soon. I truly believe that securing cyberspace must be a collaborative effort by all parties. Thailand has recently been working on founding a committee to work on uplifting cybersecurity preparedness via intersectoral cooperation,” said Prajin.

His government believes Internet users should be aware of and responsible for protecting cyberspace. Thus digital literacy education is to be emphasised and hopefully extended to other regions as well, he said. As chair of Asean, Thailand will lead the bloc in formulating regional norms in cyberspace and promoting regional and international collaboration.

Said Surangkana Wayuparb, the ETDA chief executive: “Protecting cyberspace is not just about promoting the electronics industry, systems or information security, but also creating a reliable environment, connectivity, and data utilisation. We need to analyse and understand these dimensions, along with other crucial issues regarding cyberspace such as privacy and cybersecurity, which directly affects our users.”

“Modern digital technology has arrived and been with us for quite some time now. In less than two decades, it has reshaped our lifestyles and our living patterns. It has changed the old definitions of the necessities of life such as housing, clothes, food and medicines, to now include smart phones.”