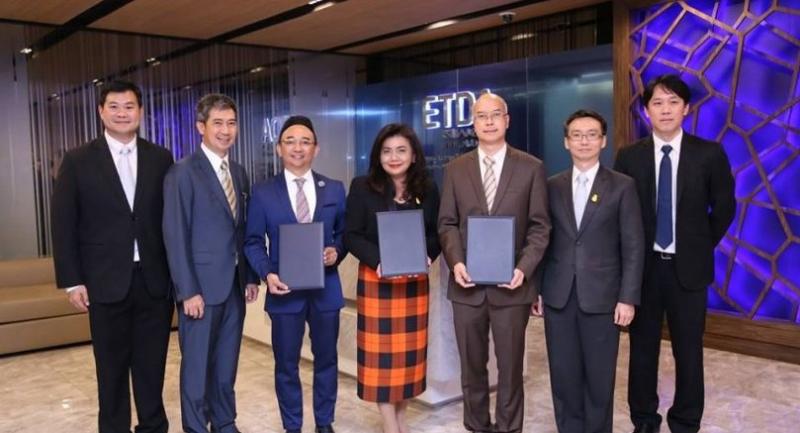 Surangkana Wayuparb, president of Electronic Transactions Development Agency (ETDA), under the Ministry of Digital Economy and Society, signed an MoU for technological knowledge and expertise sharing to support the national roadmap towards Digital Smart City, in trilateral collaboration with the Digital Economy Promotion Agency (DEPA) and Dell Technologies—a company comprised of exclusive business groups in development of infrastructure for digital future, in forms of both IT system transformation and critical asset protection.

This MoU aims at supporting national digital promotion policies under the strategy Thailand 4.0 to effect both innovation-related academic and technical co-operations, in order to facilitate economic growth and competence, as well as to securely uplift citizens’ well-being.

Dell Technologies is regarded as a specialist in infrastructure provision for both public and private organisations targeting future digitisation, with efficiency and efficacy at highest priority.

“ETDA has been working in conformity with the government’s policies, providing prompt assistance for achieving partnership, experience and perspective exchange, personnel development, and data analytics, with goal to uphold the national digital and security roadmap, driving Digital Smart City so that Thailand |can become a truly digitised society.

This collaboration will include not only digital authentication and identification system development for online services, but also promoting ease, speed, and efficiency of online transactions. This goes with the Government’s policies on facilitating businesses and services for community and people,” said Surangkana Wayuparb.

Nuttapon Nimmanphatcharin, president and CEO of DEPA, addressed that “DEPA is the organisation which pushes Smart City—an area that utilises technologies and innovations to enhance services and urban management, and to reduce cost and resources, by collaboration between businesses and citizens, leading to residents’ sustainable welfare.

Phuket, as a successful example, has been driven by the government into a Smart City in commerce and investment, with digital industry propelling parallel growth of other industries. When this project is fully implemented, the annual economic growth of Phuket will be expectedly no lower than 4.5 per cent within the next five years. Until now, the Phuket Smart City project has brought up several dimensions of development such as the Centre of Digital Excellence Phuket (CODE Phuket) established to comfort digital workers or digital content companies expecting to settle or invest in Thailand.

According to plans of the National Smart City Steering Committee, the Smart City project is yet in expansion to six other provinces: Bangkok, Khon Kaen, Chiang Mai, and the EEC. Soon there will be an announcement on Smart City assessment criteria and the emblem for Smart City.”

“Through this collaboration, Dell Technologies brings innovation and best-in-class technology for applications, data, infrastructure and security—from the edge to the core to the cloud to support and facilitate ETDA’s and DEPA’s efforts to transform Thailand into a digital resilient nation and thrive in the digital economy,” said Anothai Wettayakorn, vice president, Dell EMC Indo-China.

“At Dell Technologies, we have the strength of a family of brands: Dell, Dell EMC, Pivotal, RSA, Secureworks, Virtustream and VMware, aligned to deliver a singular goal—helping governments transform the way they work, so they can transform the lives of the citizens they serve.”