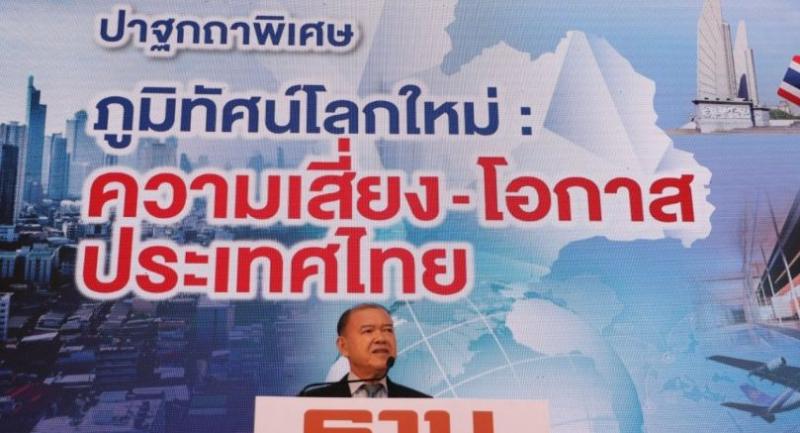 THE GLOBAL economy is in dissarray with no clear direction, while the US-China trade war is having an adverse impact on investors’ confidence worldwide, warned Supachai Panitchpakdi, former director-general of the World Trade Organisation. Investors do not know where to safely invest, because the trade war could easily disrupt global supply chains, he said.

Supachai, who was also former secretary-general of the United Nations Conference on Trade and Development, made these comments as a keynote speaker at a seminar hosted by Thansettakij newspaper on Tuesday evening.

He reminded the audience that some observers had predicted that investors would relocate their factories to Southeast Asia, partly due to rising labour costs in China, and Vietnam has already gained from this. However, he said, he was unsure if Thailand stands to gain from the US-China trade tensions, because it exports to both countries.

Regardless of the trade war, he said, a further slowdown in global trade is feared, leading to a slower growth in the global economy, which in turn will affect every economy, including Thailand.

Global trade has only just shown some signs of recovery, after being sluggish for several years. Worldwide trade rose 7 per cent in 2017 and by about 5 per cent this year, he said.

The US government expressed dissatisfaction with the WTO dispute-settlement mechanism after it lost many trade disputes, and then tried to have the mechanism changed so that it would be more favourable for the US.

“If the US can do this, then the multilateral trading system will eventually come to an end,” he warned.

Rising global debt over the past few years is also a cause for concern, especially among developing countries, Supachai said.

Many countries have borrowed funds from overseas as they are facing an economic slowdown, resulting in lower tax revenue. Hence, he warned, high sovereignty debt could be hit by a late cycle of global growth and a hike in interest rates.

As for Brexit, he said it might not be such a debacle, though the European Union is unlikely to let Britain enjoy any benefits from leaving the union.

“In Thailand we will face more difficulties as our household debt remains high and any economic stimulus package will be less effective because most people prefer to pay off their debts first,” Supachai warned.

He also advised the next government to go ahead with the Eastern Economic Corridor investment project, noting that observers are still wondering if the government initiative will materialise. The project also involves investment in a high-speed railway linking three international airports and major cities, he said.

As well, he said, the next government should double its spending on research and development in the agricultural sector. As Asean chair next year, Supachai said, Thailand should also push for progress in the Asean Economic Community (AEC), adding that the community was moving at a very slow pace, with very limited movement of skilled labour.

He also pointed out that Asean has created a non-tariff barrier on approximately 6,000 items, which is impeding trade and investment among member countries.

Supachai urged Thailand to push for a conclusion to free-trade negotiations under the Regional Comprehensive Economic Partner-ship, which consists of 16 countries.

The free-trade agreement, he said, will lead to more trade among members, as global trade could very well be adversely affected by trade war. Besides, he added, Asia needs to strengthen its supply chains.

In terms of education, he said universities should hire top experts from overseas to support teaching and research, and the wages of vocational-school graduates should match those of university graduates so more people will be encouraged to pick up a vocation.