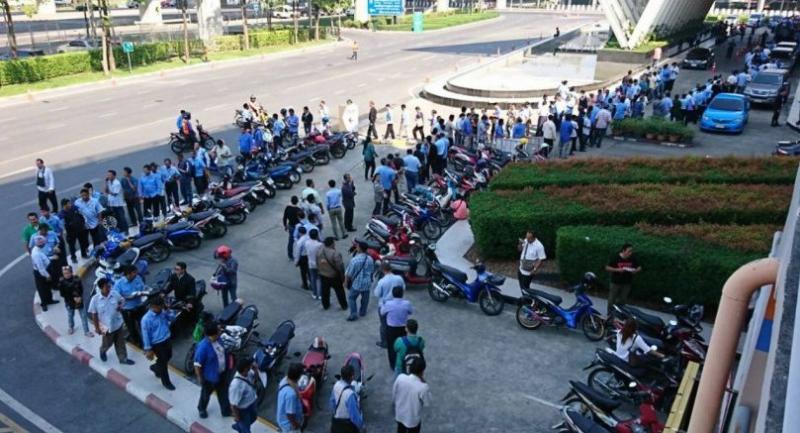 Taxi drivers queue to apply to hire-purchase loans provided by the Small and Medium Enterprise Development Bank of Thailand ahead of the formal of approval of the assistance scheme yesterday.

STRUGGLING taxi drivers have been heartened by a government decision to press ahead with a Bt10-billion soft loan scheme that will help the drivers own their cabs.

Industry Minister Uttama Savanayana, chairing a meeting that considered the special loan proposal yesterday, said the financial burden on taxi drivers would be eased as the scheme will reduce the daily rent of about Bt800 per taxi to Bt200. Further, they can make instalments of Bt400 per taxi a day to enable them to own the cabs upon the completion of the payments.

“We are relieving the burden on the drivers and are strengthening their prospects as they will be able to own their cars. We prepared Bt10 billion for this special loan project,” Uttama said.

The government set up the project in response to the fact that about 30,000 vehicles are nearing the end of their designated legal use as taxis.

Mongkol Leelatham, president of the Small and Medium Enterprise Development Bank of Thailand (SME Bank), said that the bank had received a good response from taxi drivers to the special loan project, which will also help them to upgrade their vehicles.

The bank and the University of Thai Chamber of Commerce's Centre for Economic and Business Forecasting teamed up to conduct a survey on the taxi industry. They found that more than 120,000 drivers – some 87.98 per cent of them – drove as their main occupation. The received a daily average income of Bt1,702. After expenses, their income averaged Bt400, which was deemed to be insufficient for their living needs.

Of the more than 90,000 taxis on the roads, about 37 per cent were the drivers’ personal cars.

Based on the survey, about 35,000 cars had only five years left on their legal life as taxis. From this year, more than 10,000 taxis a year are expected to have their legal status ended.

More than 70 per cent of the drivers surveys want formal loans to buy new cars on expectations of increased income, lower expenses, and the ability to schedule their own working time and have their take exceed what they pay in daily rent, the survey found Typically, most taxi drivers have not been able to access funding and depend on informal loans, which leads to financial problems.

Mongkol, referring to the benefits of the scheme, said: “Driving taxis involves a number of persons starting from no less than 3-5 million passengers per day to over 30 million foreign tourists to Thailand per year.

Upgrading the quality of life of those who have this occupation without informal debts will give convenience and safety to service users and a bring good image to Thai tourism.”

Participants in the scheme will also receive welfare assistance to upgrade their quality of life, along with occupational training that will help them boost their retirement savings.