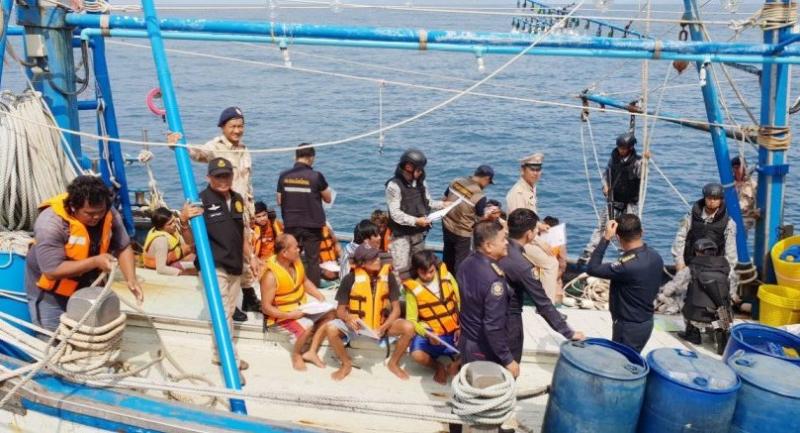 The Royal Thai Navy and security authorities yesterday join hands to search fishing vessels and test their crews for narcotics at Laemthien pier at the Sattahip Naval Base in Chon Buri province.

FISHERY EXPORTS can expect a boost after the European Union lifted the “yellow card” on Thailand for making progress in tackling illegal, unreported and unregulated fishing (IUU), according to experts, who believe the EU move will also improve the industry’s practices and reputation.

“The government has worked hard to improve the state of fishery industry regulations and administration. The next step is to make the fishery industry a key factor in driving Thailand’s economic growth,” he said.

Being spared the “yellow card” will yield three key benefits to Thailand: boost Thai exports to the EU, improve Thailand’s reputation internationally, and indirectly benefit other industries in the production chain, according to Kriengkrai Thiennukul, vice chairman of the Federation of Thai Industries (FTI).

The EU also recognised the efforts of Thai authorities in tackling human trafficking and improving labour conditions in the fishing sector.

The FTI vice chairman urged the next government to maintain the legal and administrative standards in the fishery industry, saying it was important that Thailand did not slip back into the “yellow card” category again.

“Being in the “yellow card” category has had a damaging impact on the fishery industry in terms of both sales and reputation. The current government has done an impressive job in improving Thailand’s status. What we have to do next is to make sure we maintain this standard,” he said. Karmenu Vella (R), EU Commissioner for the Environment, Maritime Affairs and Fisheries and General Chatchai Sarikulya (L), Deputy Prime Minister of Thailand hold a joint press conference about the progress made in the fight against illegal, unreported and unregulated fishing, in Brussels, Belgium, 08 January 2019. // EPA-EFE PHOTO

Thailand should work closely with the EU to maintain international standards in the fishery industry and rehabilitate fishery and maritime resources, which have sharply declined over the past years, said the president of Thai Tuna Industry Association, Chanintr Chalisarapong.

Fishery resources in the Gulf of Thailand plummeted from 3 million tonnes in 1995 to only 1 million tonnes in 2015, he said. He said rehabilitation efforts increased the resources by 200,000 tonnes last year. “If the plan could be implemented for 10 consecutive years, we would have 2 million tonnes,” he said.

Auramon Supthaweethum, director-general at the Department of Trade Negotiations under the Commerce Ministry, believes the EU move will positively impact the fishery industry. “Being no longer in the ‘yellow card’ category means Thailand’s fishery industry regulations pass the EU standards. This means that Thailand now has greater potential to expand its exports to the EU market,” she said.

“Moreover, it creates a good image for Thailand’s fishery industry and indirectly improves the prospects of developing a Thai-EU free trade agreement,” Auramon added. “This is especially because the EU values sustainable and long-term trade.”

“The yellow card was not a complete ban on fishery products. It was only a warning on fishery regulations in Thailand. Hence, I do not believe the positive impact on business turnover will be seen immediately,” he said.

“However, not being in the ‘yellow card’ category will definitely help improve investor confidence. This has been reflected in the stock market,” he said.

“For example, we have seen a spike in the stock price of Thai Union Group Plc, a key producer of seafood-based products,” he explained.

This is especially because up to 30 per cent of the total revenue of Thai Union Group comes from the EU market, according to Amnart. Business sentiment towards Thai fishery goods may also improve. This will increase the ease of doing business for Thai exporters.

Meanwhile, Thai Union Group welcomed the EU decision to lift the “yellow card” on Thailand. “The improvements to regulation and enforcement in the fishing industry have been significant, not only in terms of traceability and the sustainable development of fisheries but also in terms of eliminating human rights violations,” said Thiraphong Chansiri, the company’s CEO.

The yellow-card process created an opportunity for Thailand to lead the way in fisheries reform in the region and the government should be commended for its work, said Darian McBain, global director of sustainable development at Thai Union.