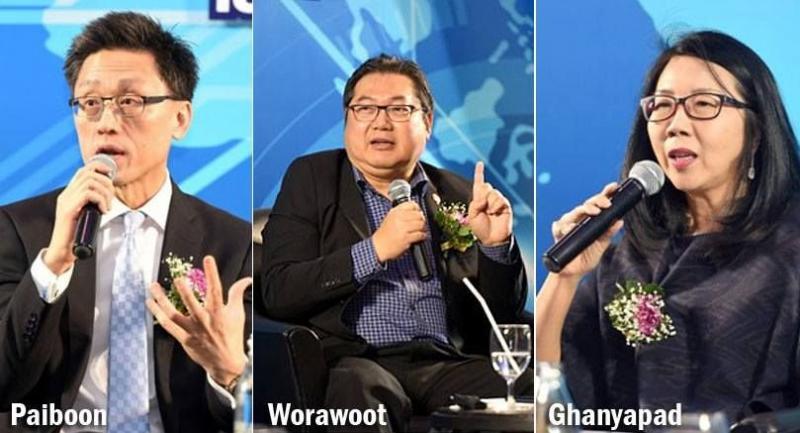 Experts also warn that instability after poll will keep away investors, affect local consumption and also pose an obstacle to export sector

At an event entitled “The Election and the Thai Economy”, held by the Economic Reporters Association, representatives from the capital market, retail sector and exporters’ representatives talked about how deferring the elections will have a harmful impact on the Thai economy.

Prime Minister Prayut Chan-o-cha on Wednesday hinted that the elections, tentatively scheduled for February 24, might have to be delayed as it would be overlapping preparations for the coronation ceremony of the King from May 4 to 6. It is likely that the election will be held on March 24, as suggested by the government’s legal team.

However, the very suggestion of a postponement of the election has had an adverse impact on investors’ confidence, Paiboon Nalin-thrangkurn, chairman of the Federation of Thai Capital Market Organisation (Fetco), said.

“Economic experts believe investment will be the key driver of economic growth in 2019. As the election will have a significant impact on investors’ sentiment, it is certain to also play a key role in the economy,” he continued.

Long-term investors are withholding investments, because uncertainty over the election as well as worries about post-election instability are discouraging them, the Fetco chairman claimed.

The index released by Fetco earlier this month indicates that investor confidence for the next three months will plunge by 5.25 per cent.

The adverse impact from a possssible delay of the national polls has also been reflected in the sluggish stock market, which is a common trend in the days leading up to a general election, he pointed out.

Furthermore, given the new electoral regulations, there is a high chance that the next government may end up being a collection of parties – without a majority in Parliament. Hence, investors are concerned whether a government without a strong majority will be able to swiftly push through new economic policies, and if this will lead to political conflicts, Paiboon said.

However, the rescheduling of the election has limited the positive impacts these policies have had on domestic consumption, he said.

“Another problem that has been suppressing domestic consumption is the high value-added tax [VAT] levied on retail goods,” he said.

Though Thailand remains one of the top four tourist destinations, travellers tend to spend little on retail goods due to the high prices and an inadequate VAT refund system. This is also why many Thais opt to buy products at duty-free stores or go shopping overseas, Worawoot explained.

Growth in the local retail sector has been slow compared to other Asean countries, which have averaged at 10 per cent versus Thailand’s 3 per cent in 2018, the TRA president said.

Also, he said, instability after the elections will further delay the much-needed reform in the retail sector, which in turn will hinder domestic consumption and damage the economy.

“In terms of exports, though it is more affected by external factors, such as the slowdown in the Chinese economy and the US-China trade war, there are several regulatory challenges that have been an obstacle for Thai exports,” said Ghanyapad Tantipipatpong, chair of the Thai National Shipper’s Council (TNSC). Exports contribute up to 70 per cent of Thailand’s gross domestic product.

“This government has been promising to remove certain regulations to help ease the process of doing business for Thai exporters, but we have yet to see any significant or concrete progress on this front,” she said.

The export sector’s prospects are dim this year due to the global situation, and are expected to drop from 7.2 per cent last year to a mere 4.6 per cent.

The National Economic and Social Development Board has officially put this down to the slowing global economy and impacts of the US-China trade war.

Potential post-election turmoil may also delay the removal of regulations and worsen the already pessimistic outlook for Thai exports, the TNSC chair said.