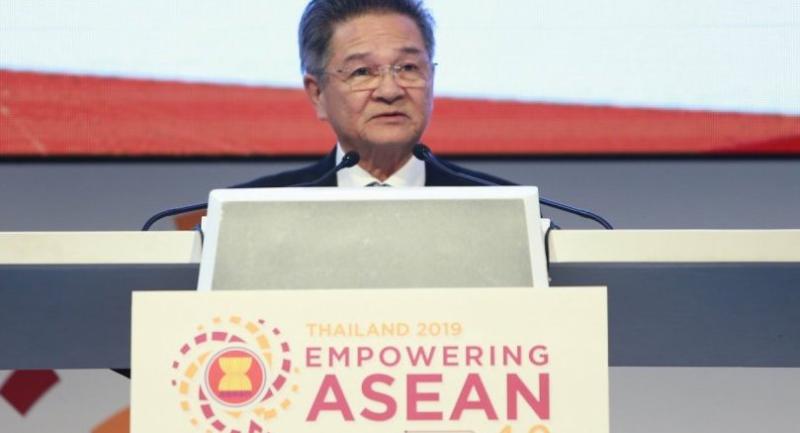 DEVELOPING digital infrastructure is the most crucial step in advancing “Industry 4.0” in the Asean region, say representatives from both the public and private sectors.

Thailand will become a full-fledged broadband nation by the end of 2019 by providing Internet access to an additional 50,000 villages this year, Minister of Digital Economy and Society, Pichet Durongkaveroj, told reporters.

Pichet, joined by representatives from the private sector, was speaking at the Asean Digital Infrastructure seminar organised by the Asean Business Advisory Council-Thailand (Asean BAC-Thailand) in cooperation with the Joint Standing Committee on Commerce, Industry and Banking (JSCCIB).

The Asean BAC is a private-sector organisation which aims to give guidance and advice to the government sector to boost Asean cooperation.

“One of the biggest hurdles in adapting to digital disruptions in the Asean region is the development of digital infrastructure,” said Arin Jira, chairman of Asean BAC.

“For example, there is limited broadband access in the rural areas, especially in the countries with a vast population such as Thailand, Indonesia and the Philippines, where Internet connectivity remains relatively poor,” he said.

Arin stressed the importance of having an adequate digital infrastructure so that business opportunities via e-commerce, international trade and e-payments can be capitalised on throughout the region.

“The governments of Asean countries should invest in core digital infrastructure. This will connect people throughout the region and lead to new business opportunities,” he said.

The digital economy ministers of Asean have agreed to cooperate on improving the digital infrastructure in the region, said Pichet.

He addressed Arin’s concern over the lack of Internet connectivity in Thailand, laying out the Thai government’s plans to address the challenge.

“In 2017 we identified up to 75,000 villages in the country without Internet access. Through the Village Broadband Internet (Net Pracharat) Project, we have since then completed the installation of fibre cable networks for up to 25,000 villages,” he said.

“Our aim is to become a full-fledged broadband nation by the end of this year by completing the Internet installation for the 50,000 remaining villages,” he said.

Another important agenda is to increase the level of information sharing between Asean government agencies in order to enhance cooperation and to improve the ability to address problems at a regional level. This will, in turn, increase the ease of doing business for companies throughout the region, Prachet added.

However, he also noted that progress on this front has to begin on the domestic side, with each Asean member digitising the way their government agencies operate.

“With Thailand, we have been pushing our agencies to use one-stop services, Big Data analytics as well as the development of digital IDs,” he said.

For example, the government expects to provide digital one-stop services from 300 government agencies within the next five years.

The final crucial issue discussed was the need to upskill and reskill the workforce within the Asean region to prepare for Industry 4.0.

“It is absolutely crucial that we increase the skills and capabilities of the workforce to cope with digital disruptions in the region,” said Arin during a sideline interview.

“Reskilling will be needed for the existing workers. We have identified up to 7 million employees in Thailand who will need to be reskilled in order for companies to digitally transform,” said Karel Eloot, senior partner of McKinsey & Company, during an interview with The Nation.

Pichet said Asean ministers are in agreement on this issue. Domestic policies to train the workforce are already in place, while a regional guideline on training the digital skills of the workforce is underway, he said.

As for Thailand, the DGA is developing a digital-skills training course for all government officers. The agency expects to upgrade 3 million government officers with digital skills in their workforce areas within the next five years.