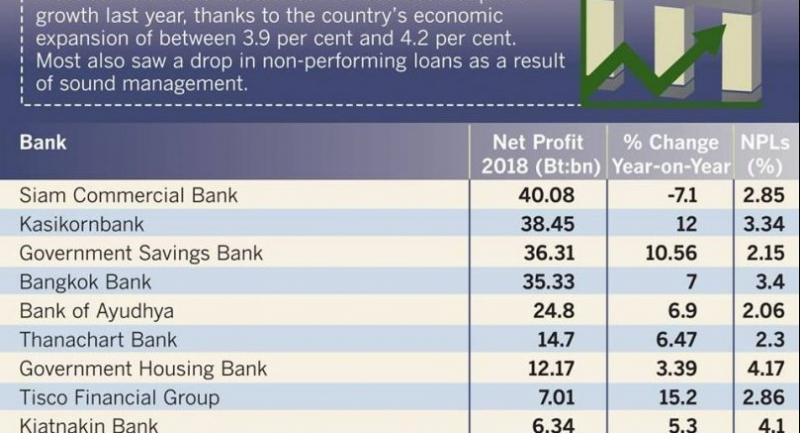 NINE commercial banks and two state banks have reported a combined net profit of Bt218.29 billion last year, representing a rise of 5.3 per cent from the previous year.

Siam Commercial Bank’s president and chief executive officer, Arthid Nanthawithaya, said the bank and its subsidiaries had a combined net profit of Bt7.1 billion in the fourth quarter of 2018, and Bt40.1 billion for 2018 (based on unaudited consolidated financial statements), a 7.1-per cent year-on-year decrease from 2017.

Arthid attributed the decline to higher operating costs during a high investment cycle, necessitated by a transformation programme. It was temporary and the bank expects the cost-to-income ratio to improve over time, he said.

The bank’s core business remained strong, while its digital customer base has expanded significantly and become more engaged, he added.

This year, the bank will direct its efforts towards realising value from the transformation programme, in terms of delivering distinctive customer experiences and a differentiated value proposition, he said.

Patchara Samalapa, president of Kasikornbank, credited the bank’s net profit increase of Bt4.12 billion or 12 per cent last year to its setting of a lower allowance aligned with assets quality.

The Government Savings Bank (GSB) announced Bt64 billion in interest rate revenue and a net profit of Bt36.31 billion last year, up 10.56 per cent and 16.38 per cent respectively from 2017, the bank’s president and chief executive officer, Chatchai Payuhanaveechai, said at press conference recently.

The bank also reported a drop in NPLs to 2.15 per cent, lower than the average in the banking system.