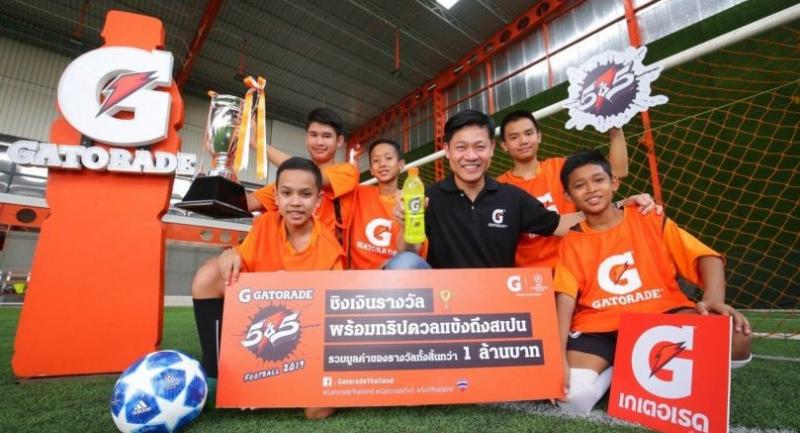 The winning team will receive a cash prize of Bt30,000 and the privilege to represent Thailand in a global competition alongside 21 winners from other nations.

The winning team of the global competition will be rewarded a once-in-a-lifetime opportunity to see the final match of UEFA Champions League in Madrid, Spain.

The Gatorade 5v5 is a five-a-side football competition for players aged 14 to 16 years old, with the core objective of being a stage for these teens to shine as potential professional football stars and make their opponent sweat.

In 2019, 22 markets of Gatorade will co-ordinate in this fantastic youth football tournament in which participating countries will have their own local qualifying round. The winners will then fly to Madrid to participate in the exclusive “Gatorade UCL Final 5v5 Experience” and play in the final round of the competition.

The winning team will be rewarded with reserved seats at the 2019 UEFA Champions League Final, to be kicked off on June 1 this year.

Somchai Ketchaikosol, marketing director for Beverages of PepsiCo Services Asia Limited, said: “This year, Gatorade in 22 markets around the world are keen to jointly organise the ‘Gatorade 5v5’ youth football tournament as we would like to use this marvelous sport as a bridge between the company and soceer-playing teens.

The Gatorade 5v5 has entered its second year, with a qualification round at every region of Thailand.

The competition’s inaugural year was joined by 4,368 young footballers from 760 teams.

Thailand’s winner of Gatorade 5v5 Football 2019 will receive a trophy, a cash prize of Bt30,000, and a privilege to be a representative of Thailand in “Gatorade UCL Final 5v5 Experience” in Madrid, along with winners from 21 other countries. The runner-up will receive a cash prize of Bt20,000 while two semi-finalists will be rewarded with Bt10,000 each. The total value of prizes from Gatorade is worth more than Bt1 million.