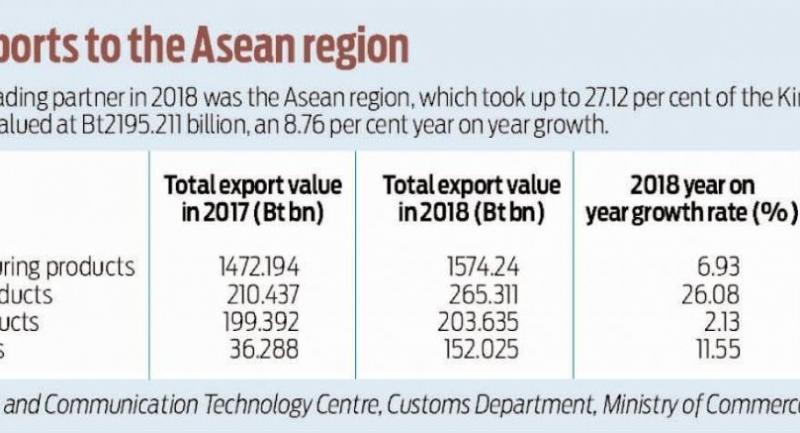 WHILE THE Thai government has a list of up to 12 economic deliverables as it chairs Asean this year, business leaders are not sure its work this year will benefit the private sector in the near future.

Arin Jira, chair of the Asean Business Advisory Council (Asean-BAC), commended the government for setting a progressive agenda for the Asean region. He particularly singled out its emphasis on improving the region’s industry 4.0.

Up to five of the 12 economic deliverables target the advancement of the region’s digital economy, notably, the Asean digital integration framework action plan, the Asean innovation road map and the Asean declaration on industrial transformation to industry 4.0.

“However, these are long-term goals,” said Arin in an exclusive interview with The Nation. The signing of declarations, the creation of road maps and frameworks may not yield tangible benefits to the region’s private sector by the end of 2019, he explained.

Of the economic deliverables that are not declarations, road maps or frameworks, the completion of the Regional Comprehensive Economic Partnership (RCEP) stands in the spotlight, followed by the implementation of the Asean Single Window trade system for all bloc members.

Arin believes the Thai government is moving in the correct path towards using RCEP to further integrate the Asean region with other economic giants such as China, India and Japan.

“However, completing the RCEP by the end of this year is going to be difficult,” he said.

“The Thai government faces a challenging task in finishing the RCEP negotiations this year,” he added.

Meanwhile, Prinn Panitchapakdi, a member of the Stock Exchange of Thailand (SET)’s board of governors, said in a separate interview that through using its position as Asean Chair, Thailand can push for further integration within the Asean region and reduce the negative impacts of the US-China trade war.

However, he added, even if deliverables connected to enhancing the region’s economic integration were completed by the end of this year, the possible benefits would not be seen until 2020.

One economic deliverable to address the region’s financial market is the “road map for Asean sustainability in the capital market”.

However, when asked whether this economic deliverable would bring investments to Thailand’s capital market, or whether it would make it more convenient for Thais to invest in Asean markets, key individuals in Thailand’s financial sector were unsure of the tangible benefits.

Prinn noted that Thailand’s Asean chairmanship might improve the Kingdom’s image internationally. Through hosting various regional events this year, Thailand may attract foreign investors to the market. However, he also noted that Thailand’s Asean period as chair could be overshadowed by other factors impacting the financial markets, such as the US-China trade war, the slowing of the global economy and the upcoming election.

The bond market may also not see any impact from Thailand’s Asean chairmanship, said Ariya Tiranaprakij, senior executive vice president of the Thai Bond Market Association. “What investors should be concerned about is the strength of the Thai baht, the level of inflation and whether the Bank of Thailand will increase interest rates.”

Ronnarit Virachanang, head of Kasikornbank’s capital markets business division, said the Thai government should use the Asean chair to push for the development of the region’s digital economy. In particular, it should stress the importance of up-skilling and re-skilling the region’s workforce to cope with technological disruptions in the market.

However, he said, it is questionable whether the private sector will see any benefits in 2019 from Thailand’s year at the helm. He also agreed with Ariya that the Kingdom’s bond market is unlikely to be affected by Thailand’s leadership.

“The key factor that will bring foreign investors into the bond market is the strength of the baht, which we expect to appreciate in the first half of 2019,” he said.

The business leaders agreed that while Thailand’s year could contribute to further economic integration of the region for the long run, the tangible benefits to the private sector in 2019 would be marginal at best.