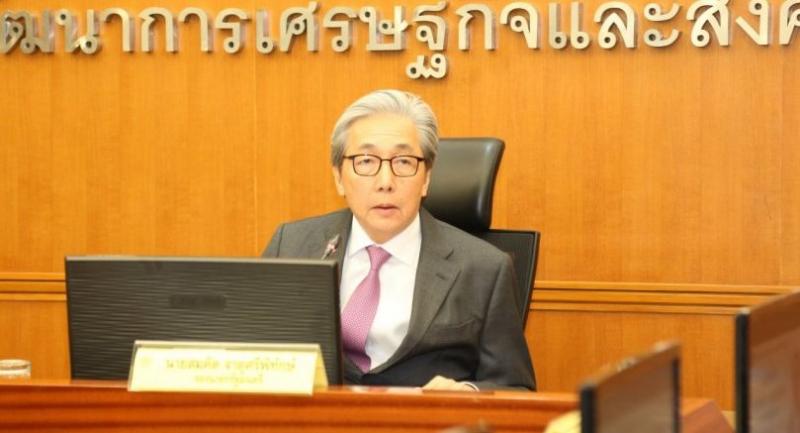 “The key challenge for reforming Thailand’s economic structure is that for so long, we have been functioning as a low value driven economy, producing and exporting only raw materials for other countries to transform,” Somkid said.

ADDING value to Thai products by increasing the connectivity between the agriculture, manufacturing and tourism industries is key to achieving economic growth in 2019 and beyond, said deputy prime minister Somkid Jatusripitak during a meeting yesterday with the National Economic and Social Development Council (NESDC).

“Thailand should focus on the local economy, particularly, uplifting the agriculture industry and bio-economy through transforming raw materials into higher value products,” said Somkid. There is a high level of urgency to strengthen the Kingdom’s local economies in the midst of the weakening of exports seen in 2018, he added.

“The key challenge for reforming Thailand’s economic structure is that for so long, we have been functioning as a low-value driven economy, producing and exporting only raw materials for other countries to transform and create additional value to,” the deputy PM stated.

He suggested the economic goal for 2019 and subsequent years should be to ensure cooperation between agriculture and manufacturing industries in harvesting and transforming raw materials into high-value goods. He urged the NESDC to echo this sentiment to the ministries of agriculture and industry, and emphasised the need for the two government bodies to work together on this issue.

“If we can achieve this, it will generate additional income for the 20 million workers who are in the agriculture industry and uplift the country’s living standards,” he claimed.

“Furthermore, to make Thai goods part of the global value chain, we need to incorporate the tourism industry into our strategy,” he said. “This would be through using the development of high-speed trains to attract tourists to local areas.

“Through connecting these three key industries, we will be able to uplift the grassroots economy and make high-value Thai products part of the global value chain,” he told the NESDC attendees. The body’s current economic development plan is on the right path, he told them, but needs to be more specific in suggesting key policies to the government’s ministries.

For example, the SEC aims to integrate the three key industries through using high-speed rail to connect the port of Ranong through to the different coastal areas in the province of Chumphon and down to the bio-economy province of Surat Thani.

This would widen the spread of tourism in the Southern Economic Corridor and integrate the development of the agriculture, manufacturing and tourism industries, Thosaporn told the room.

The NEC will focus on attracting tourism with its “Creative Lanna Cluster” that includes the provinces of Chiang Mai, Chiang Rai, Lamphun and Lampang, and carries the brand of “Lanna Heritage”.

The NeEC will focus mostly on strengthening the region’s bio-economy, with the “Bio-Economy Cluster,” which will be geared towards developing high-quality processed agricultural goods as well as areas designated for growing premium jasmine rice.

He then echoed Somkid’s concerns, saying that the Thai government will need to focus on the local economy by creating added value to raw materials and promoting tourism in smaller cities.