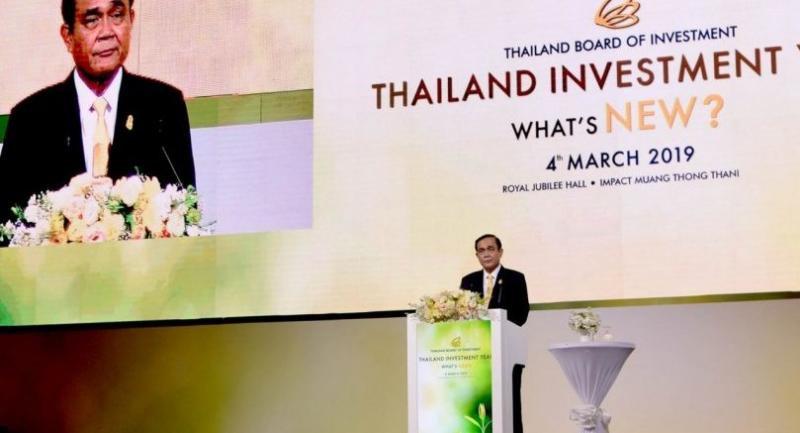 PRIME MINISTER Prayut Chan-o-cha has assured foreign and Thai investors that the government will continue to promote investments and key projects, while ensuring the Eastern Economic Corridor (EEC) goes ahead as planned.

Opening a seminar on “Thailand’s Investment Year – What’s New?”, held by the Board of Investment (BoI) with over 2,000 investors attending yesterday, Prayut said: “The government will continue with matters of investment and investment promotion for the rest of its term and the next government will certainly continue [the policy]. We hope that investors will take part in strengthening Thailand’s economy, which will benefit other countries in the region, with stability and sustainability.”

He said the country’s development was still reliant on investments from within the country and from other countries that have advanced technologies and innovation. The targeted industries have been chosen with a clear focus on promoting investments to upgrade industries with manufacturing bases in Thailand and also attracting investments in new industries.

In a special address to the same gathering on “The Year of Investment: Turning Challenges into Opportunities”, Deputy Prime Minister Somkid Jatusripitak said although all countries in the world have been confronting challenges and high uncertainties due to the slowing global economy and shrinking global trade and exports, Thailand’s internal factors remained strong as a result of economic stimulus, economic reforms and the new wave of domestic investment.

In 2018, the Thai economy grew 4.1 per cent with headline inflation at 1 per cent. Thailand’s current account enjoyed a surplus of over 7 per cent of the nation’s gross domestic product (GDP) while public debt was below 45 per cent of GDP.

He said winners of the bids for major infrastructure projects in the EEC are expected to be unveiled in April-May. The bid winner for the high-speed railway project that will connect the country’s three main airports – Don Mueang, Suvarnabhumi and U-tapao – is expected to be announced this month.

The third phase of the Map Ta Phut Port project is in the negotiation process with select private enterprises, while bids for the maintenance, repair and overhaul centre project and U-tapao airport project are expected to start this month with the winners announced in April.

“It has never happened in the country’s history – such serious investment in both the nature and the size of investment as well as speed to drive [investment],” Somkid said.

“The election is a good thing as it will ensure certainty. I’m confident that after this election, we will have Prayut return to power and everyone will take part in building the country’s future,” he said.

BoI secretary-general Duangjai Asawachintachit said that the BoI’s two special measures in the investment year were boosting competitiveness and narrowing the gap, with the aim to increase investment in targeted industries and smart cities, and promote the grass-roots economy.

Under the grass-roots promotional measure, business operators must clearly follow the cooperative plan to support local organisations with a minimum investment of no less than Bt1 million in each project.

Also among measures to promote investment in Thailand are creating a knowledge base such as improvement of plant varieties or animal breeds, research and development of creative product design and development, electronic design, engineering design and software.