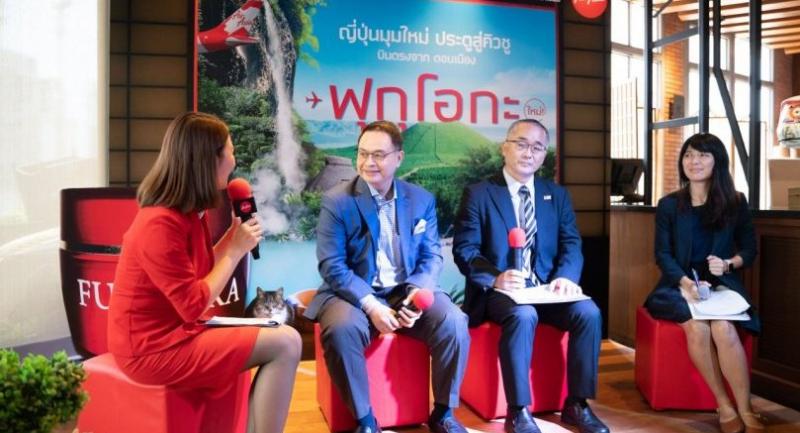 It expects to carry 3 million passengers this year, up from around 2 million last year.

The carrier will boost the number of its aircraft to 14 this year, up from 9 last year.

Thai AirAsia X has affirmed its extensive coverage of Japan by adding a four-times a week direct service from Bangkok’s Don Mueang airport to Fukuoka, the gateway of Kyushu.

Nadda said Japan is a strategic market for Thai AirAsia X and has been performing well. Even with flights across all regions of the country, Thai AirAsia X has continued to seek out new routes to offer new experiences to Thai travellers and attract more Japanese visitors to the Kingdom.

Thai AirAsia X has been flying to Japan for almost five years, beginning with Tokyo and Osaka. The carrier then added Sapporo and Nagoya last year and now Fukuoka as its fifth route. Nadda said the new route is in line with the rising number of Thai travellers to Japan.

“We still see much growth potential in the Japanese market and are hopeful that Fukuoka will further bolster tourism and the economies of both Thailand and Japan,” Nadda said.

Thai AirAsia X recognises the city of Fukuoka in Fukuoka prefecture as a high-potential destination as it is the largest city on the island of Kyushu in southern Japan and a hub of culture, cuisine and natural tourism destinations.

Thai AirAsia X flies to nine cities in four countries (including to Fukuoka) with direct flights from Bangkok (Don Mueang airport) to Seoul in South Korea; Tokyo, Osaka, Sapporo, Nagoya and Fukuoka in Japan; Shanghai and Tianjin in China; and Brisbane in Australia.

With its latest route addition, Thai AirAsia X is offering members of its loyalty programme AirAsia BIG the opportunity to book flights from Bangkok (Don Mueang)-Fukuoka, available four times a week, at a promotional one-way price from Bt2,990, including taxes and fees. Members must book by April 14, for travel from July 3 to October 26.

Nadda said that this year the carrier would also focus on opening more routes to secondary provinces in Japan and China.