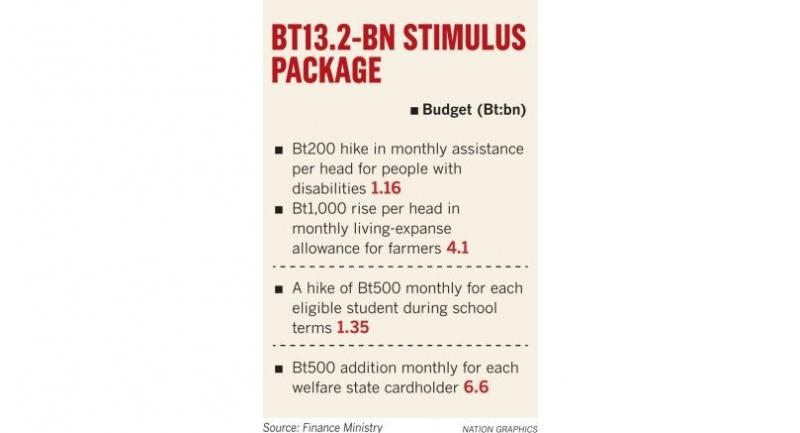 THE Thai Cabinet yesterday gave the nod for a Bt13.2-billion fiscal package to prop up the Thai economy in the middle of this year, while expecting Thailand’s gross domestic product (GDP) to expand 3.9 per cent this year.

N State welfare cards will see an increase of Bt200 per person per month in allowance for five months (May-September 2019) to those registered as disabled, for the purchase of products and services through electronic data capture (EDC), Thung Ngern Pracha Rat (Pracha Rat Money Bag) mobile app or cash withdrawal.

N A one-time subsidy of Bt500 per child for parents who hold state welfare cards, for the purchase of student uniforms and learning tools via the same methods.

Lawan Sangsanit, director-general of the Fiscal Policy Office and finance spokesman, said that the Finance Ministry saw an urgent need to proceed with the fiscal stimulus package for the middle of the year after first-quarter exports declined due to the global economic slowdown, which adversely affected the purchasing power of consumers, especially low-income earners facing still-high expenses.

The fiscal package includes tax incentives that allow individual taxpayers to deduct the value of travel expenses in major cities and secondary provinces for accommodation, food and drinks of up to Bt15,000 and Bt20,000, respectively, from personal income tax from yesterday until June 30 this year, and deduct the value of sports and education spending, purchase of Otop products and e-book expenses of up to Bt15,000 each from personal income tax.

Other tax breaks aim to encourage people to own residences and allow individual taxpayers to deduct the value of purchase of a building with land or a condominium unit of up to Bt5 million. Companies or juristic partnerships can deduct two times the value of investment expenses for an electronic tax system, including points of sale (POS), e-tax invoice and receipt and e-withholding tax.

The Cabinet also acknowledged an expenditure budget of Bt3.2 trillion for fiscal year 2020, which will start from October 2019. The budget is set for a deficit of Bt450 billion.

During the political transition to the new government, the Budget Bureau has asked the current Cabinet not to propose approval of the 2020 budget.

Once the new government takes office and presents its policy to Parliament, the Budget Bureau will propose the budget and other details for fiscal year 2020 for their public administration.

“We cannot say now whether the expenditure budget for 2019 will be used before the next fiscal year starts on October 2019. It depends on the next government,” said Nattaporn.

“If the [next] government is not much different from this government, it [budget] could be used in time at the beginning date of fiscal year (2020) and no budget review was expected. But a different government could delay use of the budget as there could be a review, new budgeting in details. In the past, in some fiscal years, the annual expenditure budget bill came into force late in that fiscal year,” Nattaporn said.