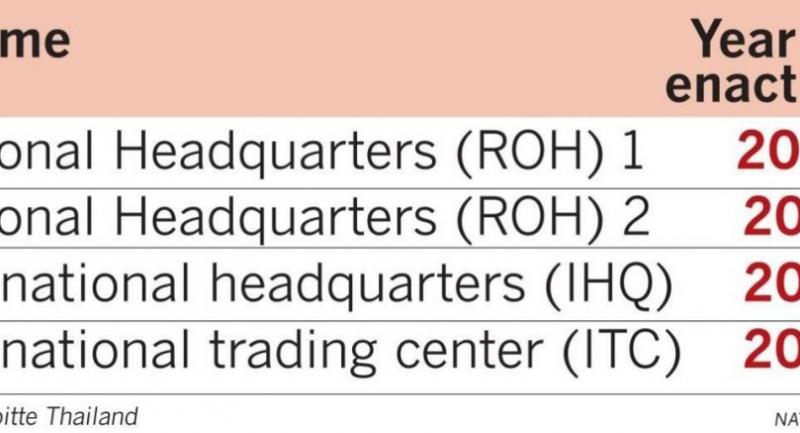 FOR MANY years now, the Thai government has offered tax incentives to companies (for up to 15 accounting periods) under the “pre-existing regimes” (See box).

These pre-existing regimes aim to attract multinational companies to place their headquarter activities in Thailand by providing income tax incentives for companies and expatriates in Thailand.

Thailand’s recent announcement to abolish the pre-existing regimes and to encourage taxpayers to migrate to the new IBC regime by June 1, 2019 was a surprise to taxpayers who currently operate under the ROH/IHQ/ITC regimes.

This change is a result of Thailand becoming an “inclusive framework” (IF) member of the Organisation of Economic Cooperation and Development (OECD)’s Base Erosion and Profit Shifting (BEPS) Project. The BEPS Project involves 15 action plans designed to eliminate structures/transactions that allow multinational companies to move profits from high tax to no/low tax jurisdictions.

As an IF member, Thailand is required to adhere to the following action plans:

In order to execute Action 5, the OECD set up the Forum on Harmful Tax Practices (FHTP) to identify countries that offer harmful tax regimes (eg, regimes that allow multinational companies to allocate profits to no/low tax jurisdictions without sufficient substance and transparency). The FHTP identified Thailand’s ROH, IHQ, and ITC regimes as harmful tax regimes. As a result, Thailand abolished the pre-existing regimes and introduced the IBC to replace the pre-existing tax regimes.

All ROH/IHQ/ITC privileges will cease after May 31, 2019. Existing ROH/IHQ/ITC companies can continue with the relevant privileges by submitting a regime migration application (ie, with more relaxed conditions, whereby they would only need to incur annual expenditures of Bt15 million to qualify for a CIT rate of 8 per cent) to the Revenue Department within May 31, 2019.

When the IHQ and ITC regimes were introduced, there was much excitement about the expanded scope of qualifying activities/privileges as compared with the ROH regimes, which only offered incentives for headquarters. Many companies, therefore, entered into extensive structural and transactional restructuring and even increased their investments in Thailand. These companies set up regional headquarters or holding companies in Thailand and re-routed trading transactions through Thailand. Now, these companies will have to re-consider their entire group structure and transactional flows.

Due to the IBC’s increased substance requirements, ROH/IHQ/ITC companies will have to consider whether or not they would qualify to migrate to the IBC regime, whether they can increase substance to qualify, or if they need to opt out of the tax schemes completely.

Companies are encouraged to thoroughly examine the implications of each option. For companies that choose to migrate to the IBC, substance requirements are even more critical due to a claw-back rule that allows the Revenue Department to revoke the IBC incentives if companies are non-compliant with IBC conditions for two or more consecutive years.

Moreover, in a case where the IBC privileges are revoked, any expatriate employees entitled to the 15 per cent flat personal income tax rate would be impacted, due to the IBC not meeting the minimum substance requirements.