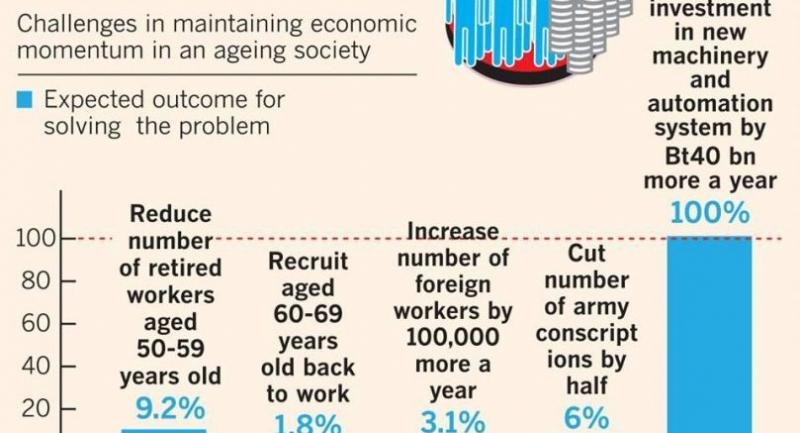 ECONOMIC growth is expected to take a heavy hit due to the rising number of the elderly and the country urgently needs to tackle it by cutting in half the number of military personnel, increasing the number of foreign labourers and employing increased automation in production, Somkiat Tangkitvanich, president of Thailand Development Research Institute (TDRI), said yesterday.

Speaking at the TDRI annual conference, Somkiat said that the country’s entry into an ageing society has created both challenges and opportunities.

As the number of elderly increase, it reduces the number of working-age people and leaves fewer labourers entering the market each year, he said. As people get older, their productivity also falls with their ages, causing a significant impact on economic growth in the long run, and potentially shedding gross domestic growth by 0.8 percentage points annually. For example, if the economy had the potential to expand 3.8 per cent, actual performance would be only 3 per cent, he said.

He said statistics show that over the last six decades Thais have increased their lifespans, living about 4.4 months longer per year. Average life expectancy of Thais was 75.3 years in 2016. And it is projected that those who were born that year could live to between 80-98 years. The number of people aged over 100 years in 2017 were 9,041, and that number is expected to steadily rise over the coming years.

Somkiat said the new government needed to tackle problems related to the ageing society. One solution is to cut the number of the annual conscription for the armed forces by half. Currently, the military drafts about 100,000 men to serve in the army. If the number could be cut half it could contribute six per cent to solving the age-related problems. Having a large number of military personnel draws vital labour resources from economic sectors. Another option is to increase the number of foreign workers by an additional 100,000 yearly, a move that would reduce the economic problem by 3.1 per cent. However, there would remain a drawback for increasing the number of migrant workers – their labour productivity is not as high as that of Thai workers.

The sustainable solution would be to employ increased automation to production, increase robotics in factories and employ artificial intelligence (AI) to production and services, he said. If technological investment increased by 1.1-1.6 per cent annually, or about Bt40 billion in 2020, the problem could be 100-per cent solved, he added.

Saowaruj Rattanakhamfu, a senior researcher at TDRI, told the meeting that the rate of adopting new technology in Thailand is quite low compared with competitors. Most factories are still employing a large numbers of workers to produce goods for the mass market. Factories were still in 2.0 while the government has been talking about Thailand 4.0, she said.

The advantage of having entered into an ageing society before other countries in Asean, is that Thailand could develop new industries and services aimed to meet demands of the ageing-society market. The domestic market serving that demographic is small, with the value of consumption by people aged 50 years and over estimated at Bt2.8 trillion, or 18 per cent of GDP in 2017. Therefore, Thailand needs to explore export markets for tourism and other services.