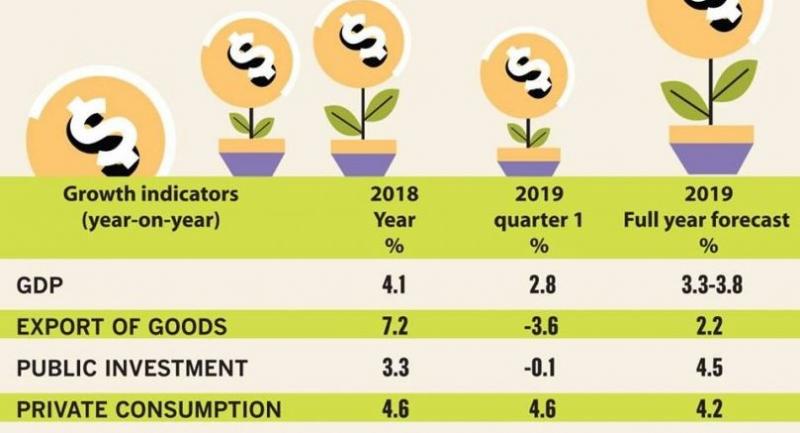 THE National Economic and Social Development Council (NESDC) has adjusted down its GDP forecast from 4 per cent to 3.3 to 3.8 per cent, citing the impact on Thai exports from the escalating US-China trade war as the key factor.

“The escalation of the trade war is the key issue affecting the Thai economy,” NESDC secretary-general Thosaporn Sirisumphand said yesterday during a quarterly press conference. The adjustment to GDP forecast made in from February was made yesterday.

There are worrying signs that the trade war will become a long-term issue for the Thai economy, especially given the recent signs of escalation, he said.

Thosaporn was referring to the series of retaliatory tariff hikes by the two countries, which were ignited by the US imposing a 25-per-cent tariff on US$200 billion (Bt6.38 trillion) worth of Chinese goods on May 10.

In the first quarter of 2019, Thai exports contracted by 3.6 per cent year on year, causing the government advisory body to lower its export growth forecast to only 2.2 per cent for this year.

This would be a significant reduction in the country’s export growth, which last year achieved 7.2 per cent, according to the NESDC.

“Exports account for more than 70 per cent of the country’s GDP,” said Wichayayuth Boonchit, the NESDC’s deputy secretary-general. “Hence, the dampening export figures will certainly have negative impacts on the GDP growth this year.”

The trade war, Wichayayuth said, is negatively impacting Thai exports in three ways. First, it slows down global trade, leading to a general drop in shipment orders. Second, Thailand is in the supply chain affected by the tariffs imposed by the US, causing Thai exports of various electronic goods to also fall. Finally, the trade war creates uncertainty, which in turn discourages investment and damages consumer sentiment.

The delay in public investment could also lead to slower economic growth. The NESDC officials expect key infrastructure projects to continue throughout 2019; public investment in the first quarter actually contracted by 0.1 per cent year on year.

Wichayayuth said that thus far, the level of public investment had not been as high as expected. Furthermore, the NESDC is assuming that the new government will be established in May, and would require up to six months to implement a new budget after announcing its policies. That would delay the spending rollout. The NESDC is predicting that public investment will grow by 4.5 per cent this year compared to 3.3 per cent in 2018.

It is crucial that there be political stability after the new government takes office, Thosaporn continued.

“This way the new government can swiftly implement new policies and seek new markets for exporters to diversify their market destinations, maintain the level of tourism arrivals at 40.5 million this year and keep up public investment in mega-infrastructure projects,” he said.

As for the private sector, exporters should seek out key opportunities to replace Chinese goods in the US market, as they become less competitive due to the US tariffs. To do so, Thai companies need to find ways to reduce their costs to ensure their goods are more competitive when exported to the US, Wichayayuth added.