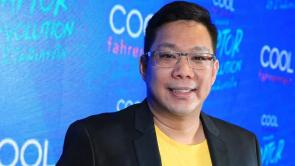 COOLISM has reaffirmed its leadership on the airwaves by becoming Thailand’s first online radio shopping station and showing profitable growth despite the downward trend.

Over the past three years, traditional media have been disrupted by digital technology, and while some magazines, newspapers, radio stations and TV channels have managed to survive through adaptation, many have inevitably closed. Coolism Limited, which operates Cool Fahrenheit under RS Public Company Limited, continues to enjoy steady growth and aims to grow by 30 per cent this year.

Coolism’s managing director Prin Minsuksaeng notes that the radio industry has remained flat over the last three years and to counter this, Coolism has revamped its plans to grow its revenue channels through “Living Young & Beyond” strategy.

The company’s main revenue currently comes from its radio station, with 50 per cent of its revenue from advertising. Its online channel has seen a growing number of hits, with people increasingly preferring to listen to music online. According to a global survey by www.shouteast.com, a website that features more than 90,000 radio stations worldwide, Cool Fahrenheit has been voted Asia’s #1 online streaming station in both 2018 and 2019.

In 2019, Cool Fahrenheit has 49 million users online each month, 35 million of which visit the station via its website, 11 million on iOS and 3 million via Android. On average, it has 162,000 users a day, spending 3.40 hours per day. Its iOS users spend 4:24 hours on the station, followed by website users. Each month, Cool Fahrenheit has a billion minutes airtime, which breaks the record and makes it the #1 streaming radio station.

“Although many new music platforms have been introduced, this has not made radio stations less popular. The beauty of listening to music on radio stations is interaction between the DJs and their listeners, something online music streaming doesn’t offer. This is why radio stations continue to attract audiences on various platforms,” says Prin.

Cool Fahrenheit has remained Thailand’s #1 radio station for 19 consecutive years, loved by Gen C people aged between 20-44. These are working people who are affluent and spend a lot of time online. The peak time of each day is office time, between 9am and 6pm. In 2018, the company enjoyed a billion baht in revenue, representing 15-per-cent growth.

Another strategy contributing to Cool Fahrenheit’s success is the expansion of its online radio shopping business which debuted in 2018 to maximize the use of its advertising time on the radio station. It also builds on the success of RS’s MPC business, which began last year and has been reaching new highs constantly. Currently, the MPC business generates 7-figures in revenue every month.

“We maintain our concept of playing good songs all day long, which has always been our selling point. The launch of online radio shopping makes us the first radio station in Thailand to do this, and it has been well-received by our target consumers. We’re passing on good news to our audience without interrupting their music enjoying experience. Rather, we make use of our advertising time. We expect that Coolism will enjoy a 30-per-cent increase in revenue compared to last year,” Prin says.

Events and concerts also enjoy support from sponsors. Recently, the station invested Bt30 million in a much anticipated concert that marked the return of the famous duo from the ‘90s - “Cool Fahrenheit presents Raptor Evolution 25 Years”. Tickets went on sale on June 26 and were sold out in 20 minutes, and the company decided to add a second show. The concert will take place on September 7 at IMPACT Arena Muang Thong Thani. There will be another concert for ‘90s fans in November featuring Dan from D2B.

Cool Fahrenheit other successful activities include Ink Eat All Around and Cool Outing.

Prin adds that building a radio station business amidst changing technology and consumer behavior is challenging, yet the success has proven that Coolism is all about quality.