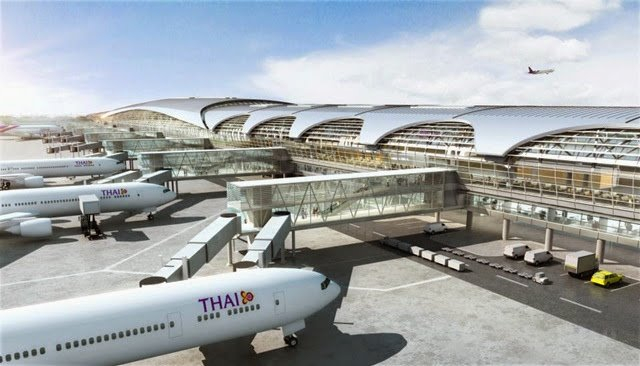 Airports of Thailand Plc (AOT) on Thursday signed a concession contract with King Power Group, winner of the bidding for management of duty-free shops and commercial spaces at Suvarnabhumi Airport as well as three airports -- Phuket, Chiang Mai and Hat Yai. The concession will last 10 years and six months, from September 28, 2020 to March 31, 2031.

AOT president Nitinai Sirismatthakarn said King Power will now be able to enter the concession areas and start electricity wiring work in consultation with the construction department of Suvarnabhumi Airport.

He said the Satellite building currently under construction at Suvarnabhumi Airport is part of the second phase of the development of the national airport. The installation of electricity wiring in advance will help ease work on the electricity system within the complex.

Meanwhile, development of commercial areas in the Satellite building will proceed in tandem with the construction process. As far as premises in the existing building is concerned, King Power will wait for the current contract to expire before beginning redecoration work.

Wichai Boonyoo, executive vice president for business development and marketing of AOT, said that the authority will gradually deliver its spaces at the airports to King Power Group, not later than six months before the existing contract expires on September 27, 2020, to allow the company to improve and spruce up the areas. Afterwards, King Power Group will have to seek approval from the AOT board.

Regarding the bidding for a pick-up counter at Suvarnabhumi Airport and the duty-free area at Don Mueang Airport, he said the AOT will wait for a clear policy from the new transport minister.

AOT plans to invite bids for the duty-free project at Don Mueang Airport this year or the beginning of 2020. For the pick-up counter at Suvarnabhumi Airport, AOT aims to complete the project by the beginning of 2020. The project will come with two options: AOT will operate the service and allow the private sector to rent the space for product deliveries or it would operate the service in collaboration with the bid winner.