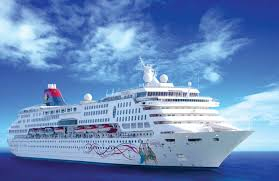 Thai brands are being urged to seek access to floating shopping malls on cruise ships to profit from the booming tourism business.

She said the Florida-Caribbean Cruise Association has issued its 2019 report on the overall picture of the industry, and the report stated that there were 28.2 million passengers of cruise ships worldwide in 2018, an increase of 5.6 per cent from the previous year.

Cruise ships have malls on board, said Nithima, providing tourists a shopping experience featuring all manner of branded and non-branded goods including clothes, bags, books, goods for children, souvenirs, perfume, chocolates, cosmetics and electronic gadgets. Some also boast art galleries on board.

As a result, cruise ships could be promising venues for Thai manufactures to sell their products, she said, adding that goods need not be branded but must be of a good quality.

Nithima said the association’s report found that the accommodations aboard cruise ships were always overbooked, and the situation has not been solved by the addition of new cruise ships.

The report predicts that the number of cruise ship passengers worldwide in 2019 would grow to some 30 million, higher than the target of 27.2 million set by the operators.

Nithima said there are several factors contributing to the boom of the cruise ship business. Most important is that tourists who have posted photos on their Instagram wall with information about their trips has caused their friends and followers to want to follow suit, Nithima said.

She said there is a trend among new-generation people or Gen-Z people to take cruises. As well, people concerned about keeping up with their work like to travel by ships as they can continue working due to internet access and other facilities.

Those tourists seeking a new life experience can also enjoy the new routes being opened up through cruise ship trips, including Machu Picchu, or could learn to cook with celebrity chefs. Some cruise trips take customers to visit areas normally off-limit to tourists, such as the Galapagos Islands and Antarctica.

She added that Thai manufacturers should visit cruise ship trade fairs to identify the channels to sell goods on board. The fairs include Seatrade Europe in Hamburg from September 11 to 13 and Seatrade Cruise Global 2020 in Miami from April 21 to 23 next year.