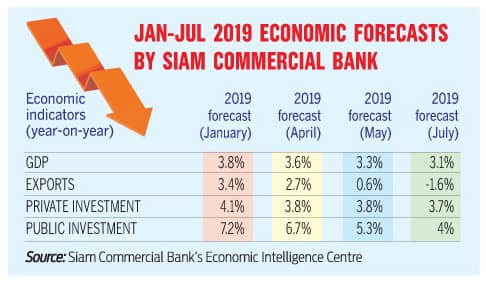 The incoming government should come up with a Bt20-billion package of economic stimulus measures in the second half of 2019, according to Siam Commercial Bank's Economic Intelligence Centre (EIC).

"In the latter half of 2018, the government allocated Bt18 billion to stimulate the economy. We expect the incoming government to at least match last year’s spending amid the ongoing slowdown in economic growth and decline in exports,” Yunyong Thaicharoen, first executive vice president and head of the EIC, said on Monday.

The economist said the policies will likely include measures proposed by the Phalang Pracharat Party and the welfare card scheme to boost spending by low-income earners.

However, Yunyong said that the next government should strike a balance in its budget spending between short-term economic stimulus and long-term policies to increase the digital capabilities of companies and the workforce.

However, the slow formation of the new government will likely delay release of the new budget. This, Yunyong said, could lead to delay in public investments in new projects towards the end of the year.

The EIC predicted that Thailand’s GDP will grow by 3.1 per cent year on year, lowering its economic growth projection of 3.3 per cent made in May. The US-China trade conflict was cited as the key cause for the decline in exports.

The unit predicted that this year's exports will decline by 1.6 per cent year on year. A decrease of 1.6 per cent will mean a US$40-billion loss in export value compared to last year. If the EIC’s projections are correct, Thai exports in 2019 will fall to their lowest point since 2015.

Another factor affecting Thai exports is the strong baht, which has appreciated by up to 13 per cent on average against Thailand’s key trading partners in the past five years. Research by EIC has suggested that the strengthening of the baht has had a direct impact on exports as it makes Thai goods less competitive compared to its competitors.

The EIC predicts that the baht will valued at between Bt30 to Bt31 per US dollar for the rest of 2019.

To cope with this problem, Yunyong suggested that the government encourage firms to make more overseas investments to reduce the level of Thailand’s current account surplus. He added that exporters, in particular, should look to expand their production base abroad to mitigate the risks from the country’s decline in exports as a result of the US-China trade war.

Furthermore, decline in domestic spending is also expected. Yunyong expects unemployment from the manufacturing and agricultural sectors to rise as a result of the downtrend in exports. The rise in unemployment in these sectors will negatively impact the level of domestic spending, he said.

Another factor that may lead to low domestic spending is the rising level of household debt, which currently accounts for 78.7 per cent of the Kingdom’s GDP, increasing by almost 1 per cent in the past six months, according to the EIC.

Yunyong added that the rising level of household debt is a key reason why the Bank of Thailand (BOT) is most likely to hold the policy rate at 1.75 per cent for the year.

The central bank, he said, is still in a hawkish stance, valuing monetary policy normalisation and the creation of policy space. Hence, unless the baht gets unexpectedly stronger and economic growth slumps at an even sharper rate, the BOT is unlikely to lower the policy rate, he said.