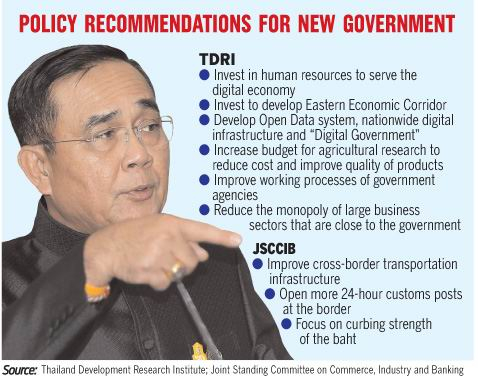 The new government will have no choice but to invest heavily in developing Thailand’s manpower, so it can survive in the fast-moving digital economy, Dr Somkiat Tangkitvanich, president of Thailand Development and Research Institute (TDRI), told the press on Wednesday.

He said the Thai workforce was facing digital disruption, and if skills are not developed in time to serve the new system, the workers will end up having to move out of the labour market. He also said that the new government needs to develop the skills of the national workforce so it is ready to serve the Eastern Economic Corridor (EEC).

From 2015 to 2018, investments in the EEC worth Bt1.014 trillion have been approved and most of them are in the sectors of petrochemical, auto, agriculture, bio technology, robotics and aviation.

Most of these industries require workers who have high expertise and the ability to learn quickly. Hence, it should be the government’s top priority to prepare manpower so it can serve the new economy and help push the country towards digital economy in line with the Thailand 4.0 strategy, he said.

Somkiat added that though the new government will continue to drive the EEC in order to boost aggressive investments from the private sector, it should also seek a way of collaborating with neighbouring communities and addressing concerns, especially those related to the environment.

Though Prime Minister General Prayut Chan-o-cha achieved some success in pushing for a digital economy over the past five years, his government also failed in several categories, such has addressing the inherent problem of corruption. He also had to rely on the special powers granted to him by Article 44.

However, as leader of the new government, Prayut will no longer have Article 44 to rely on, which means he will have to manage the country in line with law and by collaborating and communicating with the people.

“It will not be easy for the new government to run the country like it has in the past five years, but if it listens to the people and does what they want, then I believe the administration will be stable,” he said. Meanwhile, Preedee Daochai, chairman of the Thailand Bankers’ Association, said at a press conference held by the Joint Standing Committee on Commerce, Industry and Banking (JSCCIB) on Wednesday that the new government will also have to boost the ease of doing business for Thai exporters and that the Bank of Thailand will have to bring down interest rates as soon as possible to make Thai exports more competitive.

“The Bt10-billion economic stimulus that the new government is expected to implement will not be enough to cushion the decline in Thai exports,” Preedee said.

“The government will have to be more proactive in supporting Thai exporters by implementing short-term measures to boost shipments,” added Kalin Sarasin, chairman of the Board of Trade of Thailand. The short-term measures can include things such as improving logistics infrastructure at Thailand’s borders to cut down on the transportation costs for business, he said.

Kalin also suggested that Thai authorities talk to neighbouring countries about making their customs formalities available 24 hours so the flow of goods within the region can be improved. He cited the 24-hour customs facilities already available at Songkhla’s Sadao district.

He also said Thailand should be allowed to trade in the Thai currency with other countries in order to minimise the risks associated with foreign-exchange volatility.

Another factor having a negative impact on Thai exports is the strong baht, said Supant Mongkolsuthree, chairman of the Thai Federation of Industries.

Since January, the baht has appreciated 5.7 per cent, valuing at Bt30.8 against the US dollar on July 8, which marked the highest level of currency appreciation against the greenback in the Asia-Pacific region, according to Kasikorn Research.

“The baht’s strength against the dollar compared to the currencies of its competitors such as Vietnam makes Thai exports a lot less competitive in international markets,” Supant added.

Hence, he said, it is necessary that the Bank of Thailand immediately implement measures like lowering policy interest rates by at least 0.25 per cent to slow the pace of the baht’s appreciation.

He added that the JSCCIB is looking to set up a meeting by the end of next week with the central bank to address this issue.

The committee has predicted that exports this year will contract 1 per cent from 2018. It had earlier this year projected an export growth of 3 to 5 per cent.

The committee has also brought its earlier forecast for GDP growth this year from 3 per cent to 2.9 per cent.

The US-China trade war continues being a key factor damaging exports, especially in the agriculture and manufacturing sectors, the JSCCIB said.