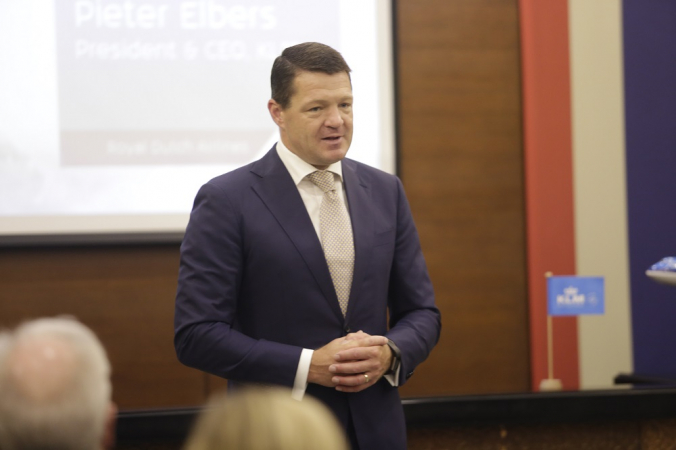 KLM Royal Dutch Airlines has invested “aggressively” in a biofuel factory in Europe in a bid to reduce its carbon emissions by 15 per cent by 2030 compared to its 2005 output.

President and chief executive Pieter Elbers made the point on Monday at an event commemorating the airline’s 90 years of flying between Amsterdam and Bangkok.

“We aim to make biofuel four per cent of our total fuel used by 2025, up from zero per cent this year,” he said.

He called the moves a step towards the stated 2050 objective of the International Air Transport Association to cut net CO2 emissions from aviation by half in 2050.

Elbers said KLM was meanwhile developing its digital abilities in all operations, including customer service, in response to global demand for digital and artificial-intelligence capabilities.

“Our business strategy in the next century, after we celebrate our 100th anniversary this year, will focus on digital, environmental and sustainable,” he said.

KLM plans to expand operations in North America and Asia.

“Last year we opened five new routes to China and we also have daily flights to and from Thailand, Singapore, Indonesia and the Philippines,” Elbers said.

Asia currently represents 24 per cent of the airline’s business, second only to the United States at 25 per cent.

“The US and Asia are the prime destinations for our business in the next century. The market shows stronger demand and more potential growth there compared to Europe and other regions.”

KLM saw a hike in traffic in June, with 4.7 per cent more passengers than in the same month last year.

Comparison of the same two months shows RPK (revenue passenger-kilometre) up 2.2 per cent, ASK capacity (available seat kilometre) up 0.8 per cent and load factor up 1.3 per cent to 91.7 per cent. The biggest rises in passenger traffic came on routes to Europe and North Africa.

Monday’s ceremony marking 90 years of flights between the Netherlands and Thailand mirrored the one in 1989 celebrating 60 years, held in a hangar in Amsterdam, at which KLM named its newest Boeing 747-400 “City of Bangkok”, complete with traditional Thai blessing rites.

The aircraft “City of Bangkok” first touched down in the Thai capital in 1991, at which time City Hall presented KLM with a bronze plaque to affix to the interior.

By the time the plane was retired after 29 years as part of a fleet renewal programme, it had flown for 134,278 hours and carried nearly six million passengers.

Elbers on Monday declared, “We are honouring history today and also looking forward to the future.”

“KLM feels very honoured to return the ‘City of Bangkok’ plaque to its home in Thailand today as a mark of great friendship between KLM, our customers and our partners in Thailand,” he said.

“And looking to the future, we are committed to continue creating unforgettable aviation experiences while also creating a truly sustainable airline for our customers in Thailand and around the world.”

KLM has been a pioneer among airlines in pursuing the goal of sustainability, topping the Dow Jones Sustainability index for the past 14 years.

It claims to have made “serious progress” in weight reductions, recycling and carbon offsetting, is now investing in the first biofuel factory in Europe, and with TU Delft is building the Flying-V, “an airplane for the future”.