Presenting the Bank of Thailand’s views at a conference in Bangkok on Wednesday are, from left, deputy governor Mathee Supapongse and governor Veerathai Santiprabhob, along with Titanun Mallikamas, assistant governor and secretary of the BOT’s Monetary Policy Group, and Don Nakornthab, senior director of the economic and policy department.--Photo by The Nation

The Bank of Thailand (BOT) will keep its policy interest rate at 1.75 per cent for the rest of his year and focus on implementing measures such as tightening controls on short-term capital inflows to ease the appreciation of the baht.

Tightened controls on hot money inflows have been effective to some extent. However, the implementation of this measure is also intended to have a long-term impact, notably at least five days after the measure’s announcement leading up to July 22 when it will take effect, and for a period to follow.

Veerathai was speaking at the Analyst Meeting conference on Wednesday. 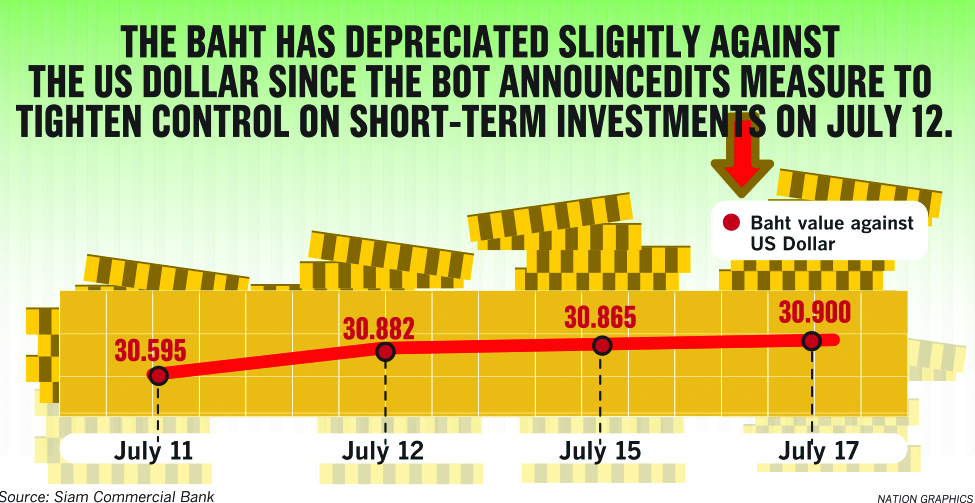 “Thus far, the level of foreign investment in Thailand’s stock market has not been impacted much by the BOT measures,” said Sukit Udomsirikul, managing director and head of research for SCB Securities, in a separate interview.

This is because the measures are meant to target short-term exchange rate speculation, he said. Therefore, long-term investments in Thai stocks from foreign investors have continued to rise over the past month.

The BOT measure is not meant to stop foreign inflows into the country or to decrease the value of the baht, but to cushion the impact of the baht’s appreciation by discouraging short-term exchange rate speculation in Thailand’s market, Sukit said.

Another measure to soften the baht’s appreciation is for the central bank to lower the policy interest rate he added.

“The economic slowdown is occurring mostly as a result of external factors such as the trade tensions and the slowdown of the global economy, which have been dampening Thai exports,” said Veerathai. “Furthermore the delay in the government’s formation and the new budget will lead to a delay in public investment towards the end of the year.”

However, the governor expects economic growth to perform better against the low base of last year, especially when the incoming government is likely to implement policies to stimulate the economy before the year’s end.

Titanun Mallikamas, the central bank’s assistant governor and secretary of the Monetary Policy Group, said: “We expect inflation to be at around 1 per cent in 2019, which is low but still within our set bracket. Hence, our worry over Thailand’s financial stability is the key factor for our decision to hold the policy rate at 1.75 per cent.”

He cited household debt, which has increased by 6.3 per cent in the past three years, as a key risk to Thailand's financial stability.

Another reason deterring the central bank from lowering the policy rate is that it has remained low throughout 2018 to the present.

“The reason why Thailand is more unlikely to relax its monetary policy when compared to other countries in the region is that our interest rate level has remained consistently low throughout 2018,” said Veerathai.

However, a key concern raised by analysts at the conference was that the BoT’s move to maintain its policy rate against the tightening trend of other central banks would cause even more capital to flow into the country and cause the baht to become even stronger.

The BOT officials addressed this concern by stating that as Thailand’s interest rate is already among the lowest in the region, slightly decreasing the policy rate will not significantly impact the strength of the baht.

"The key reason why the baht has strengthened is the strong current account surplus of Thailand, which reached US$13.49 billion in the first five months of 2019. Hence, the BOT aims to implement other measures to create a financial bumper, which slows down the pace of the baht’s appreciation,” Veerathai said.

Prasarn Trairatvorakul, chairman of the Equitable Education Fund and former BOT governor comments that the key factors behind the strengthening of the baht are the weakening US dollar and euro as well as domestic issues such as Thailand's current account surplus and the high level of foreign currency reserves.

The Bank of Thailand will have to adopt appropriate measures to cope with the situation without exhausting its resources for future financial risks, he said, adding that given the low policy interest rate, the country does not have much resources on this front.

He also predicted that in the short-term, the Thai economy will see slower growth, largely due to dampening exports. The new government should issue fiscal policies to stimulate the economy in the second half, he said.

However, the government will also have to balance its resources for long-term economic problems and implement more sustainable economic policies, targeting the productivity of the manufacturing and agricultural sectors.