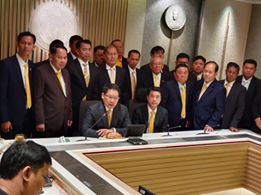 Finance Minister Uttama Savanayana, left, receives a strong show of support on Friday while providing a glimpse of the new polices expected to be announced at the end of next week. Next to him is Ekniti Nitithanprapas, director-general of the Revenue Department.--Photo by The Nation

Finance Minister Uttama Savanayana plans to propose policies targeting the grassroots economy, including expanding the benefits under the welfare card scheme and promoting e-commerce in the agricultural sector.  Members of the Palang Pracharat Party, the largest in the governing coalition, congratulated Uttama on his position as the new finance minister on Friday.

With the government’s policies likely to be officially announced by the end of next week, Uttama declined to disclose the details of the expected economic stimulus policy at a press conference at the Finance Ministry on Friday.

Economists from commercial banks predict that the new government’s stimulus package will inject around Bt100 billion into the economy to stimulate consumer spending.

The strategy of the new government, Uttama said, will focus on the domestic economy and ways to boost the grassroots economy amid uncertain external factors dampening the Kingdom’s exports.

The minister plans to increase the benefits under the Pracharat welfare card to stimulate spending by low-income earners.

“We have to make sure that the agricultural policies directly impact the farmers and increase their income in a sustainable way,” he said. “One such policy which we aim to improve on is promoting e-commerce in the agricultural sector.”

This, he said, will empower the sector with new technology and increase its competitiveness.

“The challenge, however, lies in the extent to which farmers will adopt the e-commerce platform into their business models,” he said.

Uttama went on to clarify that the Palang Pracharat Party did not campaign to reduce income tax for all. Instead, the government will be looking at changing the current tax structure to reduce income inequality. This involves increasing taxes for some and lowering taxes for others, he said.

Ekniti Nitithanprapas, director-general of the Revenue Department, cautioned that a 10 per cent tax cut for all would cost the country and the government dearly.