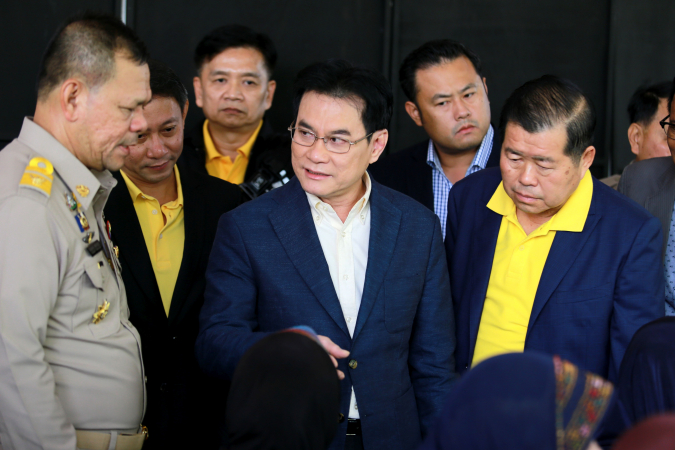 Newly installed Commerce Minister Jurin Laksanawisit along with Deputy Transport Minister Thavorn Senniam and Deputy Interior Minister Niphon Bunyamanee held a multi-party discussion on Saturday at the Southern Border Provinces Administration Centre (SBPAC) in Yala province. The aim was to come up with measures to boost the economy of five provinces in the South.

Also present at the meeting was Commerce Ministry’s permanent secretary Rear Admiral Somkiat Pholprayoon, who is also secretary-general of SBPAC.

Jurin said emergency measures still posed a problem when it comes to development in the five provinces.

“We need to tackle the problem on three dimensions – investment, tourism and cross-border trade, which is worth about Bt230 billion,” Jurin said, adding that Thailand is still suffering a trade deficit in exports to Malaysia, especially when it comes to rubber products.

“The multi-party meeting aimed to seek solutions to restore and build the basic economy in the five provinces so people have a better life,” Jurin, who is also deputy prime minister, said.

Meanwhile, Thavorn said that last week he had listened to a briefing from related parties, along with the transport minister and his deputy, and realised that a four-pronged approach will have to be taken with the development of the five provinces. The measures are:

1) Developing land transport and increasing both main and secondary transportation routes as well as connections to Malaysia and Singapore in line with the government’s one-belt-one-road strategy;

2) Developing water transport by opening three water gateways in the South, that also connect with Malaysia and China as part of the one-belt-one-road strategy;

3) Developing rail transport and connecting with other regions;

4) Developing air transport in line with the Transport Ministry’s plan to not open any new airports for 10 years, but to develop existing airports in the South, including plans to expand the Narathiwat airport.

Niphon, meanwhile, said the Interior Ministry will apply the principle of King Rama IX, “Understanding, Accessibility and Development”, to help build a better life for people in the South.

“We will focus on the decentralisation of power in the southern border provinces, especially by increasing the number of special economic zones, which will create jobs for people. In the agricultural sector, we will use ‘local mechanisms’ to solve local problems by encouraging more usage of agricultural products, like making rubber roads to generate demand for rubber and creating a stability for the price of rubber,” Niphon said.