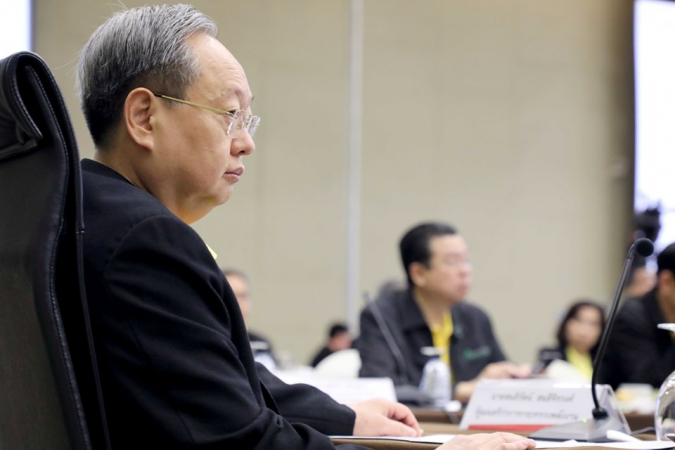 Energy Minister Sontirat Sontijirawong chairs a meeting on Saturday to discuss the direction of the ministry’s policies.

Energy Minister Sontirat Sontijirawong will hold a meeting on Monday with high-ranking ministry officials as well as representatives of related agencies and state enterprises, to discuss the possibility of implementing urgent measures to stimulate the economy.

The measures, such as increasing the amount covered via state-welfare cards, free electricity and discounts on LPG, are aimed at providing aide for low-income people and will be implemented for the next three months from August.

On Saturday, Sontirat met with the Energy Ministry’s permanent secretary Kulit Sombatsri, officials from the ministry and state enterprises such as the Electricity Generating Authority of Thailand (Egat) and PTT Group, to brainstorm the ministry’s policy directions.

Sontirat said the meeting was held to hear and consider the ideas and problems aired by the different parties.

“On Monday, I will discuss urgent measures and energy framework to be initiated in the next three months with the Energy Ministry’s secretary-general and its state agencies. The aim is to set a clear direction for all energy operators,” the minister said.

He added that the meeting on Monday will also discuss energy-related measures to help low-income earners through state welfare cards, such as a discount on the price of LPG and free electricity for users of no more than 50 units per month.

“We will discuss how these measures can actually reach the low-income strata. We want to find the right way of helping these people so they become stronger, instead of just providing them with subsidies,” Sontirat added.

He said in the long-term, the energy measure will not just reduce the expenses of low-income people, but will also give them access to alternative energy and give them a chance to produce energy for their personal use and for sale. This will create a form of sustainable assistance.

Sontirat said the PTT Group also suggested the concept of gaining “energy from the ground” by promoting the plantation of energy crops like palm and cane. This idea will not only make the agricultural sector sustainable, but will also support other stakeholders and the economy as a whole, he said.