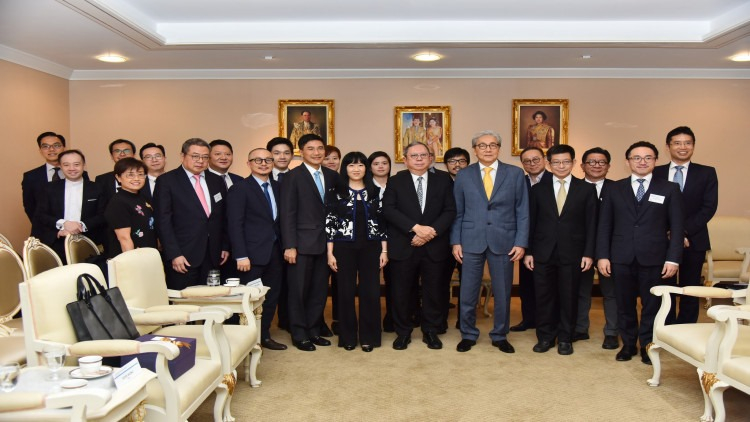 Deputy Prime Minister Somkid Jatusripitak held a meeting yesterday (July 24) with a private business mission from Hong Kong, led by chairman of the Hong Kong Trade Development Council Peter Lam, on the prospects of investment in the Eastern Economic Corridor.

Somkid revealed after the discussions that Lam had led the leading businessmen to Thailand as they were interested in exploring investment opportunities in the country, especially the innovation and digital zones of the Eastern Economic Corridor (EEC).

The first meeting between Thailand and Hong Kong on their cooperation in the 'Thailand Cyberport' project will be held in October in Hong Kong.

Lam informed Somkid at the meeting that Hong Kong's chief executive Carrie Lam will invite Thai delegates to participate in the Belt and Road Initiative (BRI) meeting, to be held in Hong Kong in October this year.

The meeting is to extend the discussions held last year. Topics will include Thailand's intention to link up with the Greater Bay Area (GBA) - comprising Guangdong province, Hong Kong, and Macao, as well as the 'Thailand Cyberport' project.

The move will promote Thailand as a hub for nurturing startups in 10 remote industries, backed by the connection of capital markets in Thailand and Hong Kong.

"I have suggested that cooperation between Thailand, Hong Kong and China should be in the form of a three-party committee as it will connect Thailand with Hong Kong and Guangdong. The meeting should also be participated by representatives from the private sector of the two countries," said Somkid.

Somkid said the government attached great importance to the planning and progress of the project.

In regard to the on-going protests in Hong Kong, Somkid said it was an internal issue and would ease up soon, adding that it would have no impact on its relation with Thailand.

Meanwhile, Somkid said executives of ExxonMobile Corporation had arrived in Thailand following the extension of the company's area for the construction of refinery and cracker plants in the EEC.

Located in the vicinity of Laem Chabang Port in Sriracha province, the petrochemical production facilities will cost Bt300 billion in investment.