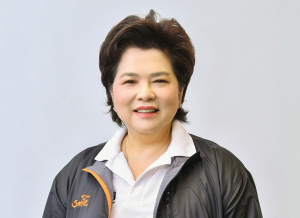 THAI Smile Airways has named Charita Leelayudth as its chief executive with the aim of speeding up the airline’s growth plans.

Charita will focus on increasing efficiency in aviation management, the hours of its aircrafts’ operation and the number of flights on existing routes while adding new routes.

“The focus is still placed on financial and investment management, promoting the use of technology and service innovation as well as HR management so as to create the optimal satisfaction for Thai Smile passengers, while performing full duties in line with the policy and business direction of Thai Airways International Public Company Limited,” the airline said.

Charita had been serving as acting chief executive and is recognised as a high-ranking executive in the airline industry.

“She is a thought leader who inspires others and who is behind the success of Thai Smile with The Best Airline in Thailand and the Travellers' Choice Regional Airline - Asia from the TripAdvisor for three consecutive years,” the company said. “Moreover, she has continued planning and deploying the policy of connecting services seamlessly with Thai Airways International as well as substantially supporting digital transformation in the organisation.”

She had earlier served as the airline’s chief financial officer.

“She is also a high-level executive who continues to put the importance on CSR activities, such as Tong Fah Pah Yim, Smile for Life, and recently with the Arabica coffee support project from the Royal Project Foundation,” the company said

“Charita will cooperate with all sectors, both domestically and overseas, in various fields to push the business forward.

“In the past years, Charita has worked with deep understanding of the nature of aviation business and the operations of Thai Smile since her last position with Thai Airways International Public Company Limited as executive vice president of finance and accounting before moving to assume the management role at Thai Smile.”