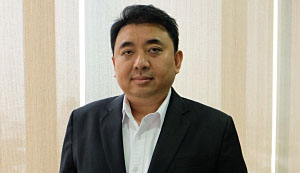 The share prices of telecoms operators have plenty of room to rally further on the back of strong earnings momentum, the upside potential for revenue growth and eased concerns over 5G capital expenditure, said Kasikorn Securities Plc equities analyst Pisut Ngamvijitvong.

He said there is considerable headroom for further gains in the shares of Thai mobile operators Advanced Info Service, Total Access Communication and True Corp due to many factors, including their expected core profit growth of 34.3 per cent year on year in the second half of this year versus the 12.6 per cent posted for the same period last year.

The other factors are potential upside gains for industry revenue growth and more aggressive capital management from market collaborations, relieved market concerns over a 5G capital expenditure cycle, and a spectrum price resetting at the recent allocation of 700 MHz spectrum.

"We see industry core EPS [earning per share] growth acceleration to come mainly from a recovery of mobile service revenue growth and effective cost control across the industry," said Pisut.

This affirms an industry improvement in terms of competitive environment thanks to better competitive parity after DTAC built up its spectrum portfolio to be competitive with its rivals. 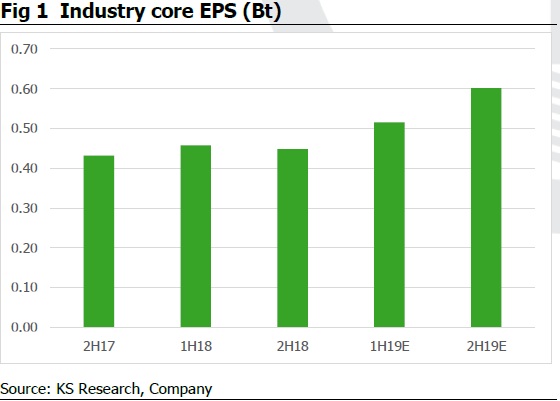 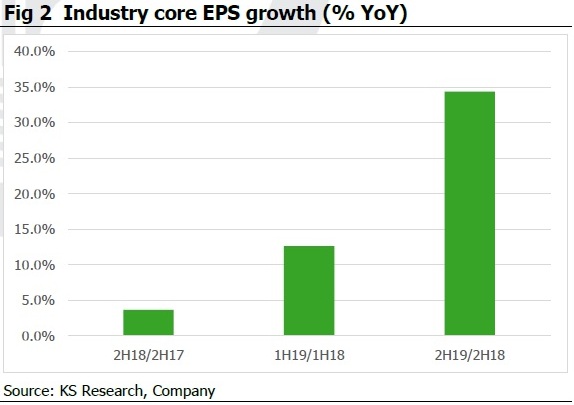 "All telco managements share the same view that competition will remain benign for quite some time. If market collaboration persists, we see some upside potential to our 2019E mobile service revenue growth forecast of 3.3 per cent year on year," he said.

"We believe the removal of low-end unlimited fixed speed packages will show a full effect in 3Q19 after the validity of various packages ends. On top of this, we foresee a chance for telcos to remove other loss-making or low-margin packages and then force customers to trade up their packages, resulting in further ARPU uplift.” 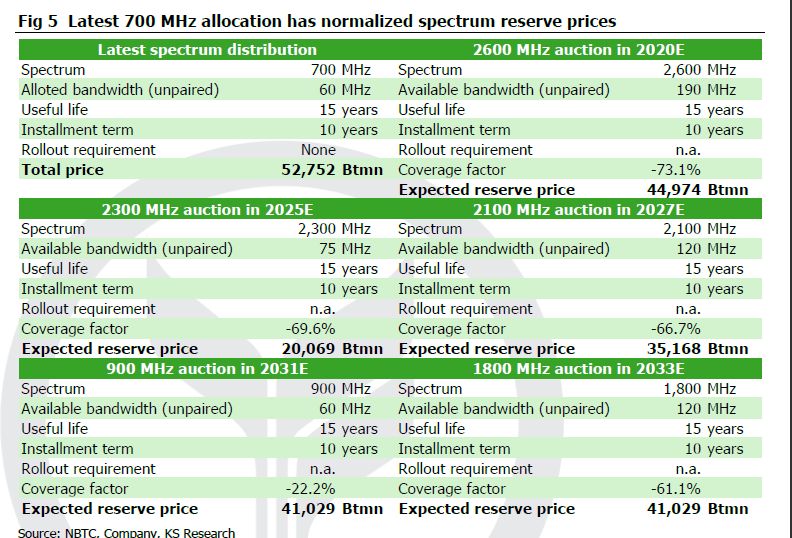 "Also, we see the normalisation of spectrum acquisition cost per MHz will benefit telcos in the long term when their 3G and 4G licenses expire in the next 7-14 years," he said. "So, applying the price per MHz of 700 MHz and adjusting for varying degrees of spectrum propagation, we estimate a spectrum acquisition cost for 2100 MHz, 1800 MHz, 900 MHz and 2300 MHz when they come up for renewal to be Bt137.3 billion, or Bt366 million per MHz - much cheaper than the past acquisition cost of Bt358 billion, or Bt954 million per MHz,".

Additionally, the 10-year instalment term for 700 MHz licences and 900 MHz licences should become an industry standard and thus applied to future spectrum auctions, he added.

"In summary, our calculation suggests that telcos will save Bt296 billion from the normalization of the spectrum acquisition cost over the next 22 years, implying 28 per cent potential upside in terms of present value using the industry average WACC [weighting average cost of capital] of 9.4 per cent,".

On a year-to-date basis, telco share prices have broadly outperformed the SET thanks to easing competition, scope for FCF (free cash flow) expansion and subsiding regulatory uncertainty, he said.

"We maintain our positive sector view as we foresee robust financial performances in 2H19E, further spectrum price normalisation for 2600 MHz and 26000 MHz multiple band auction and room for opex [ operating expenses] saving, all of which should strengthen telcos’ FCF positions and their ability to pursue aggressive capital management," he said.

"The key risks to our positive sector call are 1) intensifying price competition to reoccur; 2) 5G spectrum reserve prices to be way higher than our projection; and 3) new entrants to participate in upcoming 5G auctions.

"For mobile-related stocks, we see risks to include 1) too short a 4G harvest period; 2) risk of overinvestment in unproven 5G technology; 3) risk of new entrants; and 4) risk of equity calls.” 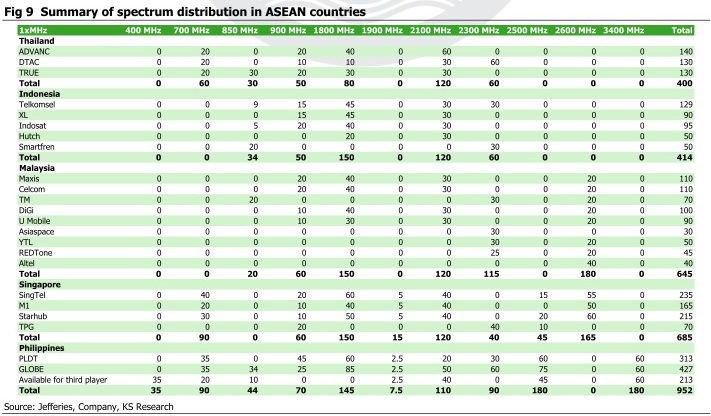