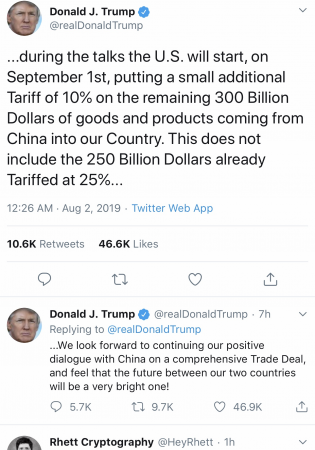 US President Donald Trump announced on Thursday via Twitter that the US government would impose additional tariffs of 10 per cent on Chinese goods with effect from September 1.

His announcement came after latest round of trade talks failed to solve the trade dispute between the two countries. Markets reacted negatively to the news as investors feared the tariffs hike and prolonged conflicts would further weaken the global economy. The Dow Jones share index fell sharply, sliding about 1%, Japan’s Nikkei index dropped about 2 per cent in this morning’s trading, the Hang Seng index in Hong Kong plunged by more than 2 per cent, the Shenzhen composite of China also dropped 2 per cent while South Korea’s Kospi was down 1 per cent and Taiwan’s Taiex slightly more than 1 per cent. Thailand’s SET fell more than 1 per cent in this morning’s trading.

Trump’s tweet read: “During the talks the U.S. will start, on September 1st, putting a small additional Tariff of 10% on the remaining 300 Billion Dollars of goods and products coming from China into our Country. This does not include the 250 Billion Dollars already Tariffed at 25%...

“We look forward to continuing our positive dialogue with China on a comprehensive Trade Deal, and feel that the future between our two countries will be a very bright one.”