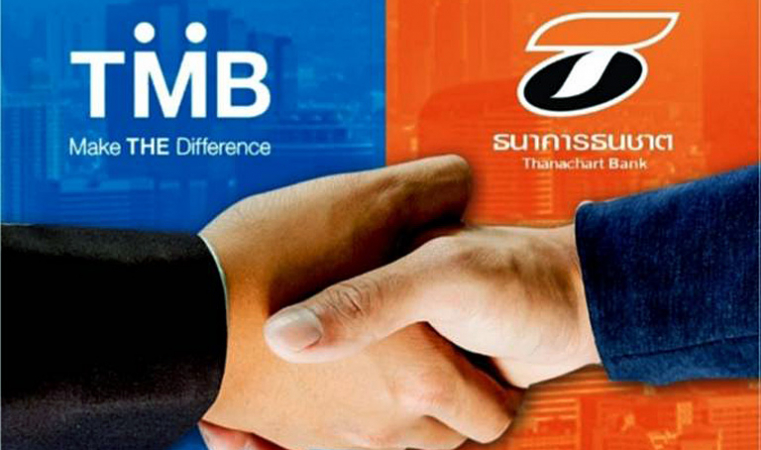 The merger, which is expected to be completed by mid-2021, involves the purchasing of shares by both banks as well as by third party participants such as the Finance Ministry.

The total value of the deal is expected to approach Bt160 billion, involving the use of Bt130 billion by TMB to purchase TBank’s shares and Bt44 billion by Thanachart Capital to buy TMB’s shares.

After the deal is completed, the two banks will merge as one and will have remaining capital for investment of around Bt80 billion, according to executives from both banks.

The remaining capital after the merger will be used for further investments to maximise benefits for the bank’s clients and shareholders, said the chairman of the executive board of director of TMB, Philippe Damas, who declined to comment on the specifics of the investment plans.

“Currently, we are focused on making sure that the merging process goes smoothly and we will have to digest this large transaction before looking into the details of the investments after the merger is completed,” Damas said at a press conference held by the two banks on Friday.

Also present at the press conference was Chumpol Rimsakorn, deputy permanent secretary of the Finance Ministry. He said the ministry will invest an additional Bt11 billion and could also purchase more shares in the future.

“The Finance Ministry has set aside an investment budget for this merger and we guarantee that the investment does not jeopardise the government budget in any way,” he said.

The merger is widely seen as part of a larger market trend in the financial sector, which has been challenged by the digital disruption changing consumer behaviour.

Banks have been trying to streamline their operations in order to focus on traditional financial businesses.

In July, Siam Commercial Bank Plc (SCB) sold 99.2 per cent of its holding in SCB Life Assurance Plc for Bt92.7 billion to FWD Group Financial Services Plc (FWD), in a move to raise investment capital and focus on its core banking business.

However, TBank and TMB stated that this merger is not a streamlining process and guaranteed that there will not be any employee layoffs.

“The merging of both banks will mean that the client size will double and the resources needed to serve our clients will increase,” said Suphadej Poonpipat, chairman of the executive committee at Thanachart Capital (TCAP).

Hence, he said, there will be no layoffs resulting from the merger. However, after the merger is completed, some branches of the two banks that are overlapping in various areas may have to be closed, he said.