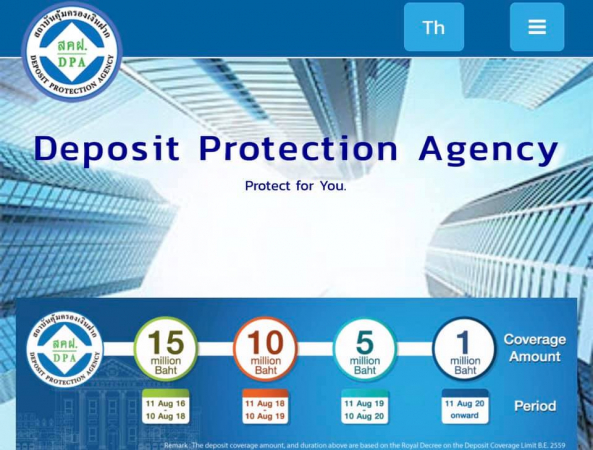 Coverage amounts for protection of deposits has been reduced by half, from Bt10 million to Bt5 million per account per financial institution starting August 11, the government’s Deposit Protection Agency (DPA) said.

The period of protection will last until August 10, 2020 after which the coverage amounts will be reduced to Bt1 million.

DPA president Songpol Chevapanyaroj said depositors covered will also drop to 99.65 per cent of total bank depositors from 99.83 per cent at present.

When the coverage amount reduces to Bt1 million, the depositor coverage will reduce to 98.14 per cent of total depositors.

“Although the number of depositors covered will have decreased, the coverage rate is higher than the global benchmark,” he said.

DPA, established in 2007 in the aftermath of the 1997 financial crisis, has been created to reduce taxpayers’ burden when crisis hits the financial system. Before the crisis, a blanket coverage was in place, therefore it was largely attributed to a rapid rise of public debt as a result of government spending tax money to rescue the banking sector.

The limited insurance is expected to check the risky behaviour of investors who search for high rate of returns without taking into account potential risks.