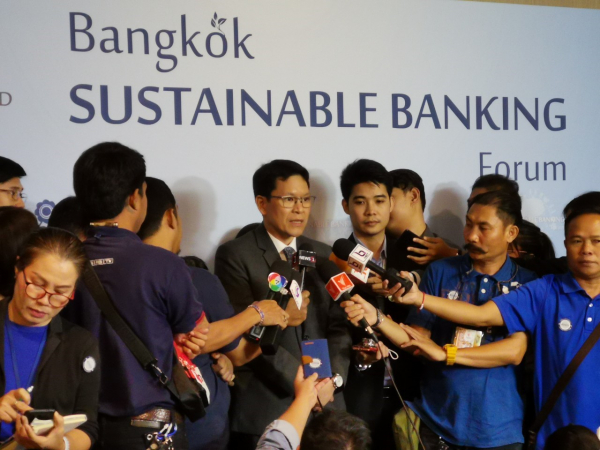 The central bank’s Monetary Policy Committee will remain autonomous and continue to base its monetary policy decisions on the existing criteria, said Veerathai Santiprabhob, governor of the Bank of Thailand.

Thailand’s central bank has raised its guard against future intervention in monetary policy by the deputy prime minister, Somkid Jatusripitak.

The Bank of Thailand (BoT) governor has guaranteed that the Fiscal and Monetary Committee to be appointed by Somkid “will not have any power” over the central bank’s monetary policies.

Somkid announced last week that he would soon appoint a committee to supervise the country’s financial stability. He was worried about a strong Baht hurting the economy.

Mainly created to maintain the Baht’s stability, the committee will be comprised of representatives from various financial and economic institutions such as the BoT, the Finance Ministry, the Securities and Exchange Commission (SEC) and the National Economic and Social Development Council (NESDC).

However, private sector representatives raised concerns after Somkid’s announcement, pointing to the need for the central bank’s neutrality and independence from interference, and noting that the committee’s duties seemed to overlap with the central bank’s role.

BoT governor Veerathai Santiprabhob brushed off these concerns early on Tuesday, stating that the Fiscal and Monetary Committee is only meant to play an advisory role and will not impact the central bank’s autonomy.

“The committee will be beneficial to the country, as it will allow different financial institutions in the country to work together to reduce income inequality and cope with global economic threats such as the on-going US-China trade war,” he said.

However, he claimed, the committee will not be able to dictate the central bank’s monetary policies and will only act as advisors to the different financial and economic institutions.

For instance, the central bank’s Monetary Policy Committee (MPC) will continue to base its policy interest rate decisions on the existing criteria, he continued.

The BoT recently cut the policy interest rate from 1.75 per cent to 1.50 per cent.

The key reasons for this decision included the negative impacts of the trade war on Thai exports, which has damaged the overall Thai economy, as well as the low level of inflation, the governor said.

Going forward, he said, the central bank will increase its focus on the country’s financial stability, especially given that interest rates have been lowered.