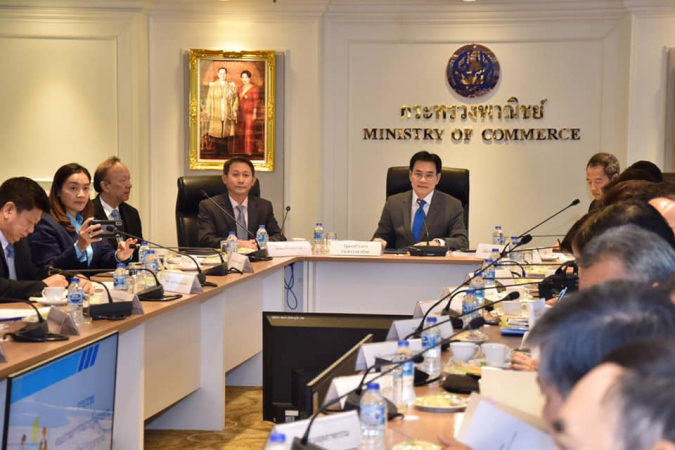 On Wednesday (August 14), trade officials met with private sector representatives as part of the Joint Public and Private Sector Consultative Committee to discuss ways to help Thai exports cope with the negative impacts of the trade war.

Private sector representatives present at the meeting came from the Thai National Shippers’ Council, the Chamber of Commerce and Board of Trade of Thailand, the Federation of Thai Industries and the Thai Bankers’ Association.

Thai exports have been negatively affected by the ongoing US-China trade war. In the first six months of 2019, Thailand’s total exports declined by 2.91 per cent year on year, valued at US$112 billion, according to the Commerce Ministry.

However, economists throughout the country have projected Thai exports to decline in 2019 largely as a result of the trade war affecting Thailand’s exports to China, which accounts for over 10 per cent of the Kingdom’s total exports.

Thailand saw its shipments to China in the first half of 2019 contract by 9.72 per cent year on year or close to $1.5 billion in value, according to the Thai Customs department.

Despite these projects, the Commerce Ministry still maintains its “working target” for exports at 3 per cent year-on-year growth, even after today’s meeting with the private sector.

“The Ministry of Commerce, along with the private sector, will form a working group to analyse how Thai exports can further penetrate key markets,” said Jurin Laksanawisit, the newly installed deputy prime minister and commerce minister, during a press conference after he held the committee meeting on Wednesday.

The minister further stated that the “high-potential-market penetration” strategy will “yield tangible results in 3 to 6 months”. However, he declined to comment on what tangible results could be expected from targeting more markets.

The five targeted markets include the CLMV (Cambodia, Laos, Myanmar and Vietnam) subregion, the rest of Asean, secondary cities in China, the Middle East, as well as India and South Asia.

These markets have shown high demand for Thai goods, giving Thai exports the potential to further penetrate these destinations and grow in value in the upcoming months, he said.

The working group, with representatives from the ministry and the private sector, will closely examine ways to increase Thai exports to these markets, as well as promote the goods that do particularly well for each destination, he explained.

Hence, the committee found that there was a good opportunity to revive Thai exports to Iraq in the upcoming months, he said.

Kitsana Vachekrilas, secretary-general of the Thai Chamber of Commerce, stated: “The private sector has been waiting for the formation of the new government for many months in the hope that a clear trade policy will emerge to boost Thai exports.”

Today’s meeting with the ministry has led to a public-private sector working group to solve trade issues in Thailand which may lead to promising results, he said.