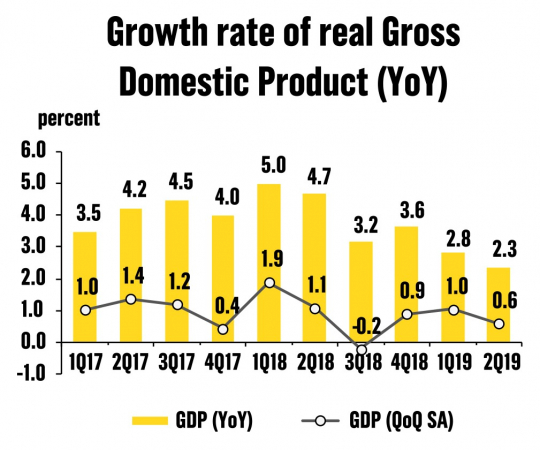 Economic growth sharply slowed in the second quarter to 2.3 per cent due to both external and domestic factors, according to a state think-tank report released today( August 19). Gross domestic product in the second quarter expanded by 2.3 per cent, a drop from the 2.8-per-cent growth rate in the first quarter, said the economic report released by National Economic and Social Development Council (NESDC), a state think tank.

The 2.3 per cent growth rate is the slowest in 19 quarters, or nearly five years.

GDP grew by 2.6 per cent overall for the first half of the year. However, the economy in the first half was affected by the trade war, a slowdown in the global economy, market volatility and the delay forming government after March’s general election, said Thosaporn Sirisumphand, the NESDC secretary general.

Unfavourable conditions have impacted on consumer and investor confidence, according to the report, with Thai exports contracting and a slowing of growth in tourist arrivals due to economic conditions in their own countries.

The think tank forecast the full year’s growth could still achieve 3 per cent, or a range between 2.7-3.2 .

“The economy is expect to recover soon,” Thosaporn said, expressing his optimism that the economic stimulus package due to for the Cabinet’s approval tomorrow would help shore up the economy.