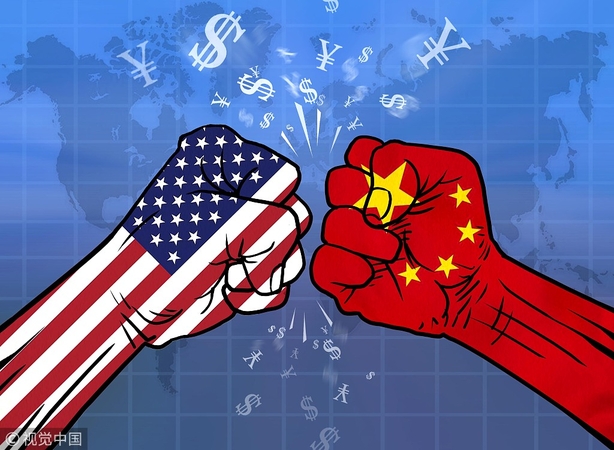 Beijing will impose additional levies on approximately $75 billion worth of US goods including soybeans, oil and aircraft in response to Washington's latest planned tariffs on Chinese imports, the Customs Tariff Commission of the State Council said on Friday.

The commission said that the country will add extra tariffs of 10 percent or 5 percent, depending on the product, on imports from the United States. Some of the levies will be implemented starting on Sept 1, while the rest will take effect on Dec 15. In addition, a 25 percent or 5 percent duty on US-made vehicles and auto parts will resume on Dec 15.

After China's announcement, November soybean futures in Chicago declined as much as 0.9 percent at the opening, reaching a two-week low. The Dow Jones Industrial Average's drop of 130 points at the opening of trading was attributed to Beijing's tariff announcement.

China's tariff commission said its tariff moves have been "forced" to deal with the US' unilateralism and trade protectionism. It is hoped that China and the US will resolve their differences in ways acceptable to both parties, it said.

The US' latest tariff threat, targeting $300 billion in Chinese goods, has intensified the yearlong Sino-US trade spat. The proposal, once introduced, means that virtually all Chinese products exported to the US will be subject to extra levies.

The Ministry of Commerce vowed on Thursday that any new US tariffs would lead to escalation and retaliation. Ministry spokesman Gao Feng said at a news conference that China will "resolutely defend the interests of the country and the people". He also urged the US administration to correct wrong moves and get back to the right track to address problems.

China has a number of tools in its toolbox to use against the US government's trade bullying moves, said Zhang Jianping, a researcher at the Chinese Academy of International Trade and Economic Cooperation of the Ministry of Commerce. Zhang spoke at a recent seminar in Beijing.

Jiang Yuechun, director of the World Economic and Development Department of the China Institute of International Studies, said China "has cards in its hands" in both hardware and software areas, but it has been weighing their timing and necessity.

Jia Xiudong, a research fellow at the China Institute of International Studies, said despite headwinds, China can achieve high-quality development, and the fundamentals of the country's economy are strong. "In the future, the resilience of the economy will be further released," he said.

In response to the capricious US administration, China will maintain strategic strength, Jia said. The country will make enhanced efforts to boost scientific and technological innovation no matter how the situation changes, he said.