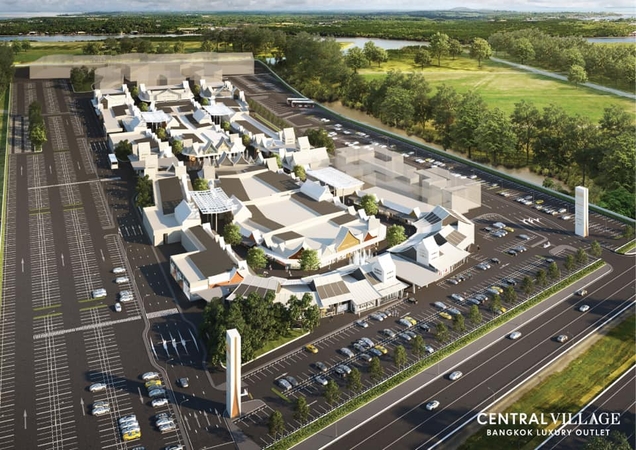 Prime Minister Prayut Chan-o-cha today (August 27) ordered the Ministry of Transport and Interior Ministry to investigate the dispute between the Airports of Thailand (AOT) and Central Pattana (CPN) over the latter's premium complex project "Central Village", saying that fairness will be ensured for both parties.

AOT had previously objected to the development of the 184-rai luxury mall, reasoning that it would cause traffic congestion on the roads to Suvarnabhumi, and that lighting in the area would pose an aviation risk as it could distract pilots during landing. It also alleged that the developer lacked proper authorisation.

The Bt5-billion Central Village is the first international luxury outlet in Bangkok, situated next to Suvarnabhumi Airport on 100 rai with a total project area of 40,000 square metres. CPN will tomorrow (August 28) conduct a press tour of the project, having declared that it was legally built in strict compliance with current city planning regulations. Central Village also has a valid licence from an authority with approval power to connect its entrance with the airport. CPN said it hopes for a fair investigation.

At the Cabinet meeting today (August 27), the prime minister asked all related agencies to swiftly solve the dispute between AOT and CPN.

"I have ordered the Ministry of Transport and Interior Ministry to take up the case to ensure fairness to both parties. The issue involves many stakeholders with some still subject to approval by local authorities," said Prayut.

"I have told the AOT to submit a letter to the Civil Aviation Authority of Thailand to investigate the possible impact from the opening of the premium outlet mall, and the Interior Ministry to check whether the retail complex is in the green area and has received an valid licence ," he said.

Prayut said the government will speed up the investigation and make a final decision. If the private sector is right, the public agency needs to approve the project. All parties have to act fairly, he added.

Interior Minister Gen Anupong Paojinda said the dispute was not centred on the land plot, but city planning problem which is the responsibility of the Sub-district Administration Organisation (SAO) and the chief district officer.

Permanent Secretary for Interior, Chatchai Promlert. has informed the Director General of Department of Provincial Administration and the chief district officer to find out the facts and submit a report.

Legal action will be taken if the SAO has committed wrong doings.