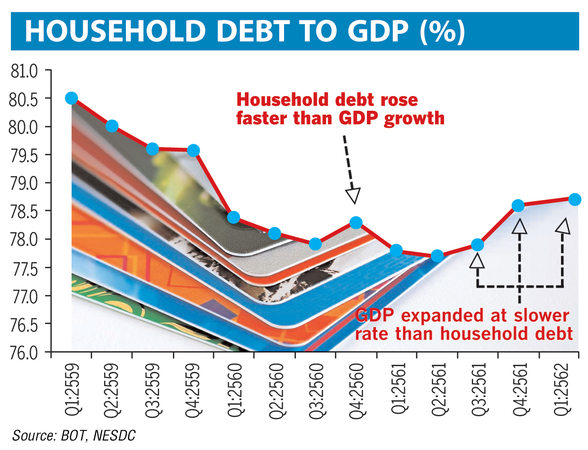 The report was released on September 2.

The state think-tank warned that household debt has been rising continuously since mid-2017, and in the second quarter of this year, it is likely to continue rising, as commercial banks have granted 9.2 per cent more personal loans.

The outstanding balance of personal loans granted by commercial banks has expanded by 11.3 per cent, the highest since the fourth quarter of 2015. Outstanding loans for homes and automobiles rose by 7.8 and 10.2 per cent respectively, decelerating from 9.1 and 11.4 per cent in the previous quarter.

Non-performing loans (NPLs) to individuals in the second quarter rose 10 per cent from the same period last year with an outstanding balance of Bt127.4 billion. This accounts for 2.74 per cent of total loans and 2.75 per cent of total NPLs. Outstanding non-performing loans for cars and credit cards accelerated at the rate of 32.3 and 12.5 per cent respectively, while personal loans under watch are still at a high level and credit cards with an outstanding balance of more than three months and over has started expanding.

Judging from the trend of household debt in the second half of 2019, housing loans are expected to slow from the first half because the demand for new homes is expected to slow down from the first half as demand for homes is likely to drop and financial institutions are likely to impose restrictions. However, the quality of credit will possibly drop because the government and the central bank have taken measures to give low-income people easier access to loans.

In a move to supervise credit expansion, the Bank of Thailand has revised several regulations for household debts, such as introducing a loan-to-value ratio for home, credit-card and car loans and is also driving the concept of sustainable business finance through the emphasis on corporate governance at an organisational level and in the broader sense.

The authorities have also created opportunities for people or small entrepreneurs who cannot get loans from commercial banks by using mechanisms from state-owned specialised financial institutions, such as promoting Krung Thai Bank to provide more informal loans under the concepts of pico and nano finance as well as launching the People Financial Institution Act, NESDC said.