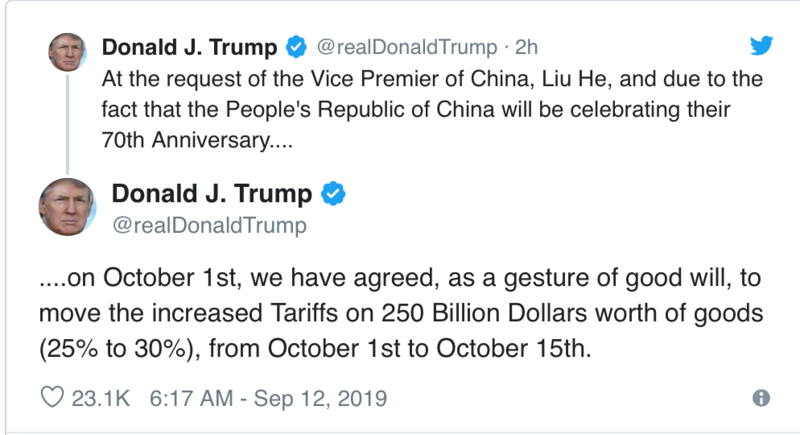 Japan’s Nikkei 225 rose about 1 per cent in Thursday’s morning trade boosted by signs of an easing in the trade tension between world’s two largest economies, the United States and China. Taiwan and Korean stocks also increased.

US President Donald Trump on Wednesday tweeted that he will be delaying the increased tariffs on $250 billion in Chinese goods to October 15 from October 1 as a “gesture of good will” to China.

His tweet came after China scrapped tariffs on some US goods on Wednesday ahead of the latest round of trade talks. 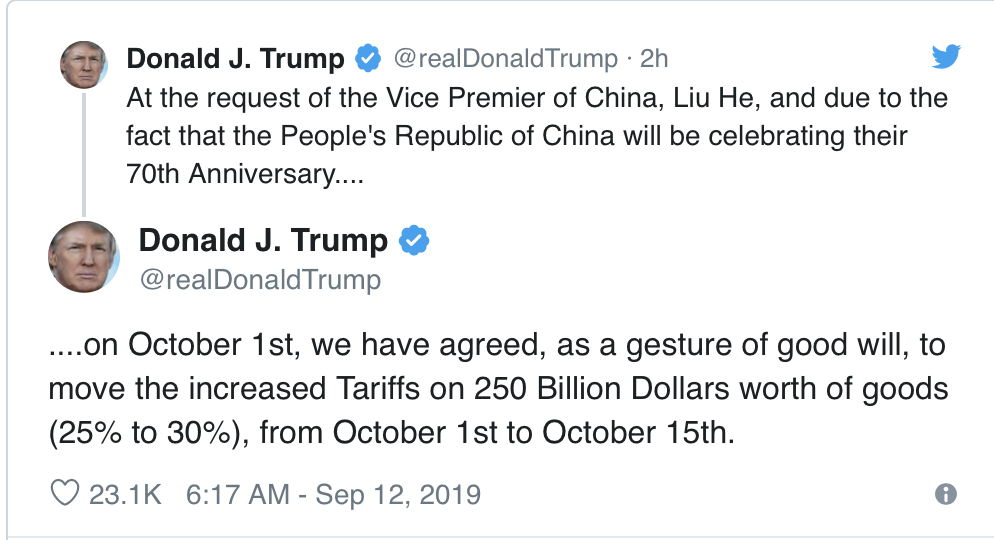 Trump said the postponement came “at the request of the Vice Premier of China, Liu He, and also marked the People’s Republic of China’s celebration of their 70th Anniversary.”

The tariffs were set to increase to 30 per cent from 25 per cent on selected categories of goods. Liu He is set to be in Washington for talks in early October.

CNBC reported that US stock futures jumped more than 0.5 per cent after news of the delay. The Dow is poised to open up 150+ points on Thursday.

China took first the move to ease trade tensions, announcing the first group of products for exclusion from the initial round of additional tariffs on United States imports scheduled to take effect on Tuesday, the Customs Tariff Commission of the State Council said in a statement on Wednesday.

All items on the two lists will be excluded from additional tariffs for a year up to September16, 2020. That means the items will not be subject to additional tariffs imposed by China on US products as countermeasures to US Section 301 measures.

For the 12 items on the first list, tariffs already levied are eligible for refunds. The affected enterprises can apply for refunds within the next six months, the statement said.

The four items on the second list can be excluded from tariffs but are not eligible for refunds.

The statement said the commission will continue to work on the exclusion of additional tariffs on US products, and the lists of the subsequent groups will be released in due course.

Experts said the measure is important because it will to some extent ease the impact of the China-US trade disputes for enterprises in both countries.

Chen Huaisheng, an expert at the China Chamber of International Commerce's legal services department, said the measure will support the development of relevant companies and boost their confidence.

“We have heard opinions and feedback from the corporate sector, and they expect the exclusion will reduce a potential negative impact from the additional US tariffs,” Chen said.

The measure can also help enterprises to control production costs, especially for some importers in the agricultural and chemical industries, and to stabilise market supply of certain products, said Tian Zhihong, an economics professor at China Agricultural University.

China decided to initiate the exclusion process for additional tariffs on US products on May 13. The first-round applications, from enterprises, business associations or chambers of commerce in China, were accepted from June 3 to July 5, the commission said.

The work of accepting applications for exclusion from the second round of additional tariffs on US products is ongoing, with the deadline set for October 18, it added. The second round was worth $60 billion, taking effect last September, the China Daily reported.

The tariff exclusion process for the third round of additional tariffs on US imports will be launched at an appropriate time, according to the Customs Tariff Commission.