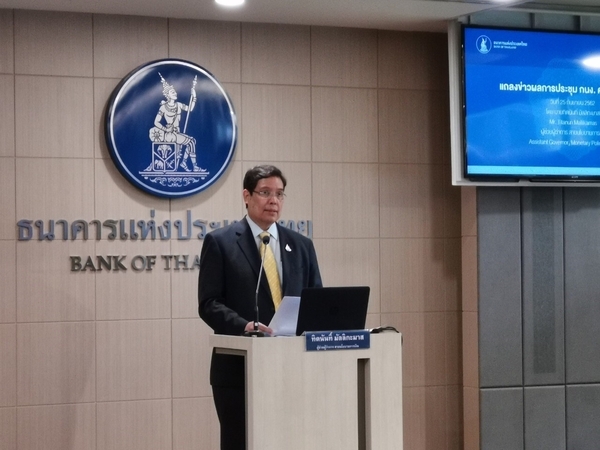 The Monetary Policy Committee on Wednesday (September 25) reduced its forecast for economic growth this year from 3.3 to 2.8 per cent and for next year from 3.7 to 3.3 per cent.

“This is the fourth adjustment since last year,” said its secretary, Titanun Mallikamas. “In June 2018 the committee estimated GDP growth at 4.2 per cent, and then later adjusted it to 3.8, 3.3 and 2.8 per cent, for a total 1.4-per-cent decrease from the original estimate.”

He said the committee based its latest decision on the economy expanding at a slower rate than expected, especially in the export sector.

“We previously predicted exports to hold at 0 per cent but then had to adjust that to minus-1 per cent due to the stronger baht. The slowdown in exports is starting to affect domestic demand and private investment, while reduced employment is lowering domestic consumption as well.”

The committee also revised its projection for import expansion from 0.3 to minus-3.6 per cent and for public investment from 3.8 to 2.5 per cent.

“Other factors were foreign trade disputes, the decline in tourism, rising household debt and the effects of natural disasters,” Titanun said.

“The government’s economic stimulus packages have helped maintain GDP at this level. Without those, it would have gone down even lower.”

“This was due to increased gold exports thanks to spiking gold prices,” Titanun said.

The downward revisions elsewhere, though, made it clear that the committee is somewhat more pessimistic about the economy than the Asian Development Bank, which on Wednesday lowered its GDP forecast for 2019 from 3.9 to 3 per cent.