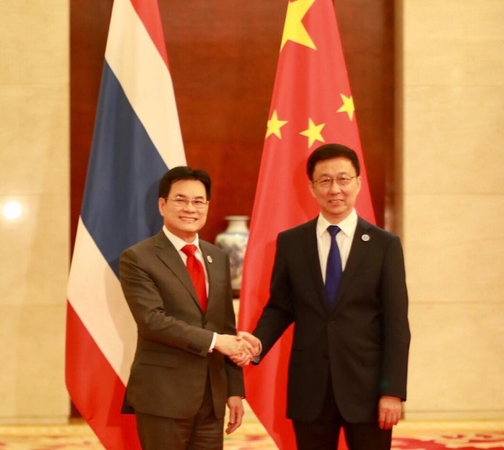 Deputy Prime Minister and Commerce Minister Jurin Laksanawisit last week met with the deputy premier of China to improve the two countries’ strategic economic partnership through a focus on greater cooperation and increasing trade in agricultural products from Thailand.

When the Deputy PM met Han Zheng on September 20, his China counterparty congratulated hi on his new position and Thailand’s work as this year’s chairman of Asean. Jurin in turn expressed his admiration for The Belt and Road Initiative (BRI), a global development strategy of the Chinese government.

Both deputies also discussed trade in agricultural goods. Jurin asked China to speed up purchases of Thai rice and rubber in line with a memorandum of understanding between the nations, while thanking China for loosening inspection measures on fruit and frozen chicken from Thailand.

Thailand’s Director-General of the Department of Trade Negotiations, Auramon Supthaweethum, said that Xi Jinping, the China President, will fly to Thailand this November to attend the Asean-China Summit, while Thai officials will bring businessmen to join the China International Import Export (CIIE) trade fair at Shanghai.