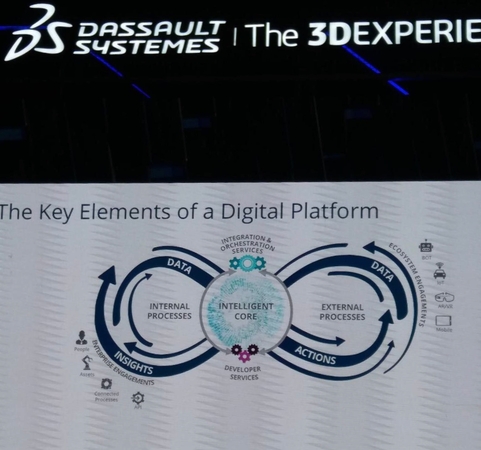 Thailand’s manufacturing sector will lag behind unless it takes steps to embrace the emerging economies of intelligence for which data and the capacity to synthesize contents are key success factors.

According to Robert Parker, a senior executive of IDC, a global provider of market intelligence and other services, about 50 per cent of the world’s businesses will be digital by 2022, while worldwide growth in digital and related investment is estimated to be 17.5 per cent per year.

Speaking at Dassault Systemes’ 3D Experience conference in Shanghai, China, last month, Parker suggested that this will lead to a new era of cyber-physical manufacturing using AI (artificial intelligence), IoT (Internet of Things) and other digital tools on a large scale.

The key elements of a new digital platform will have an intelligent core driven by data, insights and actions in both internal and external processes. People, connected machines, robots, IoT, AR/VR and other mobile devices will work together for the integration and orchestration of services to drive manufacturing in the new eco-system.

The new eco-system also connects customers with smart factories for mass-customisation of products, real-time orders to factory floors and digital-twin product manufacturing and service, with a feedback loop in an AI-driven product design process.

As a result, the post-Industrial 4.0 era will be driven by the value of massive data as well as an organisation’s capacity to learn and synthesize the contents.

Guillaume Vendroux, CEO of Dassault Systemes’ Delmia brand, said at the same conference that the top agenda for the global manufacturing sector is to reduce carbon footprint for a more sustainable planet with more products in harmony with nature.

Michael Larson, a top executive at ABB, said the new generation of factories will be more flexible with human workers working alongside robots safely and efficiently to further boost productivity.

He also noted that 50 per cent of the global demand is forecast to shift to Asia around 2030 when electric vehicle (EV) transformation, product individualization, shorter product life- cycles, and regionalization of supply chain will likely play the leading role.

Mark Chen, a senior executive of Huawei, said the Chinese telecom and tech giant is positioned to take advantage of the emerging industrial internet, with its cloud 2.0 platform facilitating AI and 5G (fifth-generation cellular) in smart production for small and big manufacturers.

This will boost productivity as well as product quality and lead to products as a service like software as a service (Saas).

Albert Pozo, chief digital officer of commercial catering firm SATS, said a good example of manufacturing in the age of experience is the inflight catering business in which digital-twin tech is used to create a virtual kitchen for the best practice in the industry, covering food excellence, chefs’ know- how and other key features.

Digital twins are also used in 3D visualization for remote technical consultation. A new Shanghai factory setup can benefit from the skills of US-based experts using a 3D visualization technology with AR/VR devices.

Sensors, RFID, and Wifi equipment are also used in the new generation of factories and connected machines in an eco-system of data-rich network and apps.

Dassault Systemes also showcased its Solidworks brand in Bangkok last week, with highlights from two users of its products, namely, Brainworks and Institute of Field Robotics at King Mongkut University of Technology Thonburi.

This will allow mass customization for production of cars and trucks, for example, on the cloud platform with multiple apps for collaboration. Designers, engineers and other experts can work together on the platform in real time across borders as if they were in the same room.

In Thailand, Chatchai Pholmoon of Brainworks said the Thai firm uses the 3D Experience platform for special tool designing and customization for customers such as those needing robotic hands in the manufacturing of automotive parts and bathroom accessories.

For example, one automatic machine can be designed to produce 7 different models of an accessory for mass-customisation of products.

He said the Thai food and beverage industry also has a growing demand for special robots and a gripping system to automate its food production system.

Wuttichai Visarnkuna of Institute of Field Robotics said Solidworks’ software has been used to design a bomb and human detection robot for a Thai military unit responsible for countering terrorism in southern Thailand.