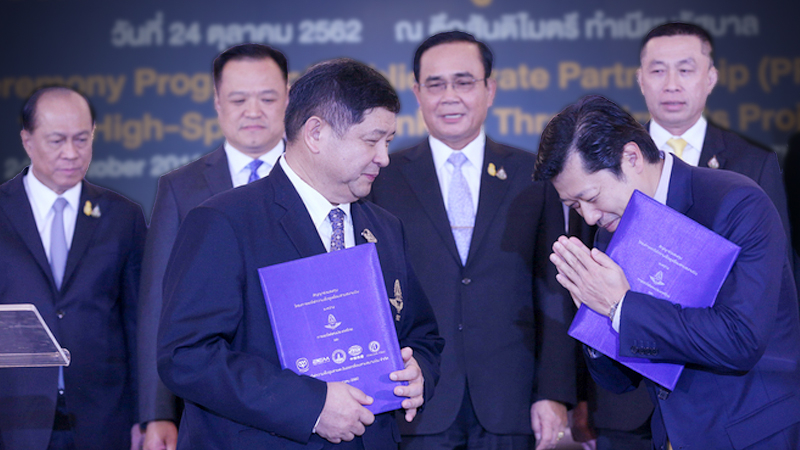 The CP-led group and the SRT sign the contract for the high speed train project. Seen in the picture are SRT acting gover Worawut Mala, left, front row, and CP group chairman of the executive board Suphachai Chearavanont, right front row. PM Prayut Chan-o-cha presides over the contract signing ceremony.

The Charoen Pokphand-led consortium and the State Railway of Thailand today (October 24) signed the contract for the development of a high-speed railway linking three international airports, presided over by Prime Minister Prayut Chan-o-cha at Government House.

The high-speed network will connect Don Mueang Airport in Bangkok, Suvarnabhumi in Samut Prakan and U-tapao in Rayong.

CP consortium made the lowest bid for the project. Others in the group are Bangkok Expressway and Metro Plc, China Railway Construction Corp, Ch Karnchang Plc and Italian-Thai Development Plc.

The Eastern Economic Corridor Policy Committee today also signed a MoU with the SRT in support of the project's development.

Suphachai Chearavanont, chairman of CP's executive board said the rail route is 220 kilometre in length and the train can travel at the maximum speed of 250 km per hour. The construction of the project is expected to kick off in the next 12 months and be completed within five years.

SRT acting governor Worawut Mala said the signing marked another milestone of the country's transportation infrastructure development, which is developed under the Public-Private Partnership Net Cost basis. The project is valued Bt224.544 billion and all asset will be handed back to the state at the end of the 50-year contract.

Eastern High-Speed Rail Linking Three Airports Co Ltd, a company set up by the CP consortium for the project, signed the deal with the SRT on its behalf.

The high-speed rail is expected to be up and running in 2023. It is estimated to create 16,000 jobs in the construction period and another 100,000 jobs in the next five years.

The initial steps in preparation for construction, such as moving public utilities along the route, will take two years, he said.

Anutin said he hopes all parties involved would focus on getting the job done and not on gains or losses from the contract.