Bank of Thailand moves to rein in baht's appreciation.

The Bank of Thailand (BOT) relaxes rules to stimulate capital outflows and lessen pressure on the Thai baht.

Central bank governor Veerathai Santiprabhob announced the measures on Wednesday  as a bid to slow the baht’s worryingly rapid appreciation. The new measures will come into effect on Friday (November 8), he said. 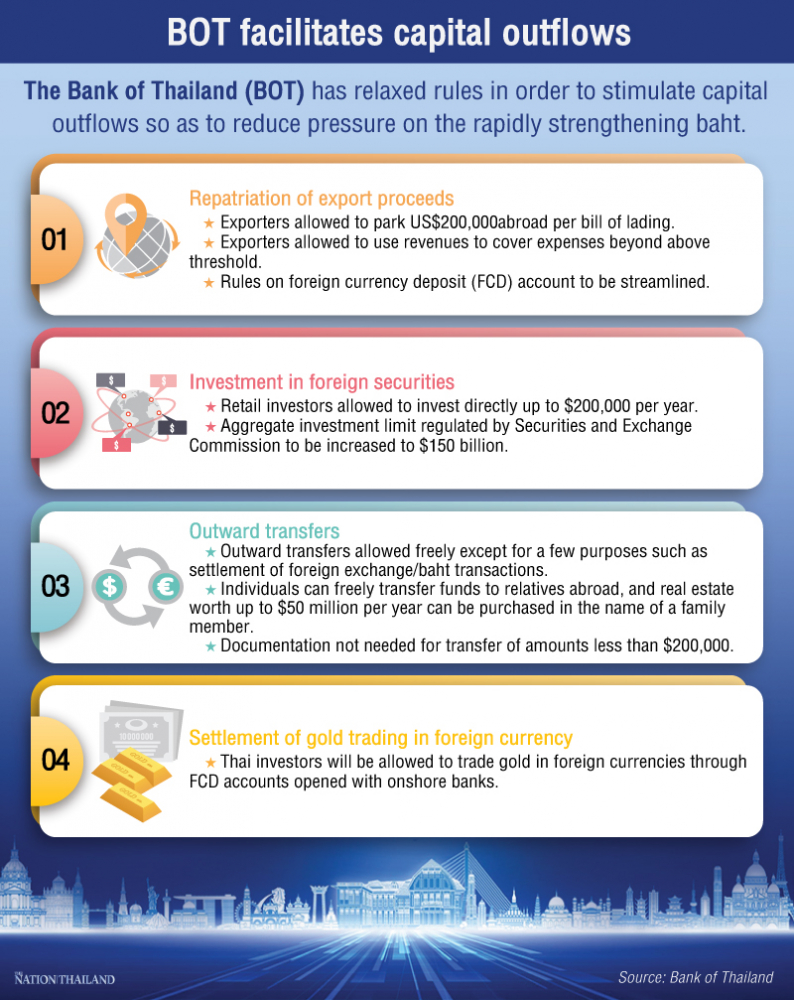 The  details are as follows:

The Thai baht has been under pressure due to imbalanced capital flows in the current environment of highly uncertain and volatile external conditions, the Ministry of Finance (MOF) and the Bank of Thailand (BOT) decided to relax regulations to stimulate capital outflows to help promote capital flow balance and lessen pressure on the baht. Such relaxations include allowing exporters to keep foreign currency proceeds overseas, allowing retail investors to invest in foreign securities without going through a Thai intermediary institution and allowing businesses and individuals to transfer funds abroad more freely. These relaxations will be effective 8 November 2019, with details as follows:

The above relaxations will help businesses reduce fund transfer costs and manage foreign exchange risks more efficiently. In addition, the BOT has been in discussion with the Minister of Finance to increase the threshold for export proceeds that do not need to be repatriated to USD 1 million per bill of lading within the next three months. Such proceeds account for approximately 80 percent of all exports.

Thai investors will be allowed to trade gold in foreign currencies (through FCD accounts opened with onshore commercial banks) with designated gold trading companies that have received approval from the BOT. Previously, such transactions could only be done in baht. This is to reduce the pressure on the Thai baht from gold-related transactions. Investors are able to keep foreign currency proceeds from gold investment in their FCD accounts, without having to exchange into baht for subsequent purchases. This relaxation will increase investment options for investors and will be aligned with the more relaxed foreign investment regulations. In addition, the BOT is also prepared to approve gold futures trading in foreign currencies in the next phase.