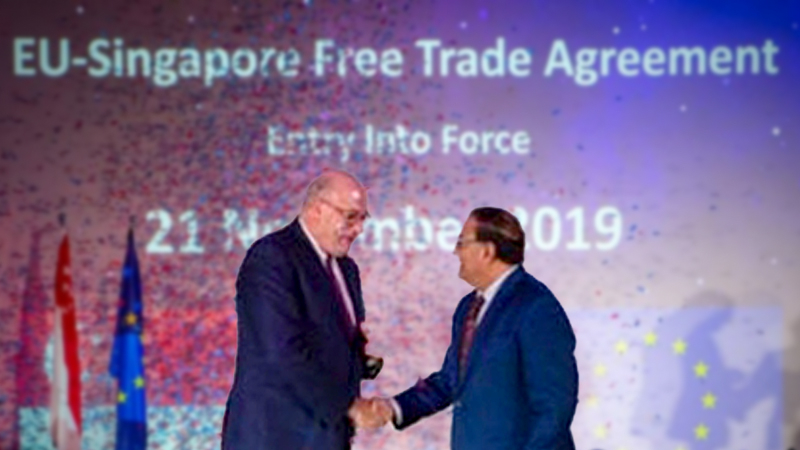 SINGAPORE - The Council of the European Union (EU) has approved the EU-Singapore Free Trade Agreement (FTA), which will remove nearly all customs duties between the two jurisdictions from Nov 21.

Mr Iswaran said the FTA marks a watershed moment in the relationship between them. It is the first such agreement between the EU, which is the world's largest single market, and an Asean member state.

He also said it will be a step towards a larger relationship between the EU and Asean, which is expected to be the world's fourth largest market by 2030.

"This is a an excellent opportunity for companies on both sides, in the EU and in Singapore, and in particular for our small and medium enterprises (SMEs)," said Mr Iswaran.

Singapore will continue to ensure its SMEs can benefit from FTAs, he added, citing last month's FTA symposium here for SMEs to understand specific aspects of such trade agreements.

Enterprise Singapore has also set up a website where SMEs can access a tariff calculator that will tell them what are their preferential margins for particular products or markets based on Singapore's 24 existing FTAs, Mr Iswaran said.

The EU-Singapore FTA will allow 84 per cent of Singapore exports, including food products and electronics, to enter the EU duty-free, with the rest to follow in the next three to five years.

It also contains strong rules on trade and sustainable development, including the protection of labour rights and the environment, Mr Iswaran said.

"Under the agreement, the EU and Singapore will remove obstacles to trade and investment in green technologies, as well as foster green public tendering and create new opportunities in environmental services.

"These forward-looking provisions recognise the increasing need for trade to contribute positively towards the fight against climate change and reaffirms our commitment to the Paris Agreement."

Mr Hogan said a "European Green Deal" will be a priority for the next European Commission - the executive arm of the EU - which will take office next month.

"Singapore will be able to tap into the initiatives that will be proposed to 'green' business activities across the EU.

"There will be a lot of money invested in new initiatives and opportunities for environmental services, businesses and software industries that Singapore will be able to take advantage of."