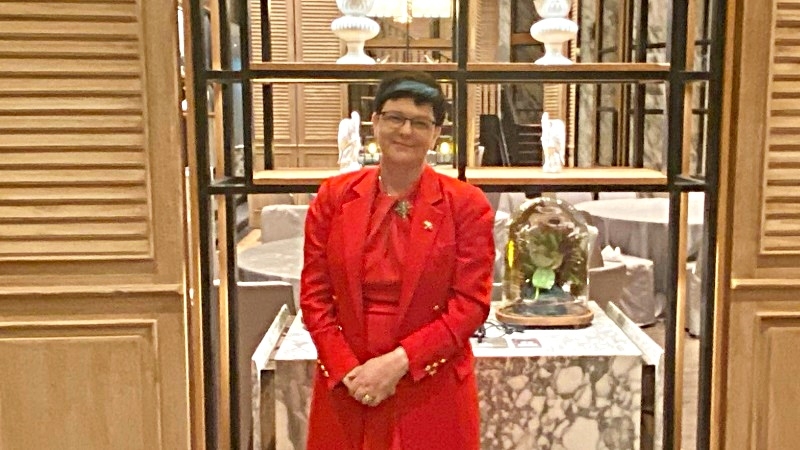 By MANOTE TRIPATHI
SPECIAL TO THE NATION

As Britain grapples with Brexit amid great fanfare surrounding a looming general election, Baroness Lucy Neville-Rolfe DBE CMG, Chair of UK-Asean Business Council, was in Bangkok recently to promote existing and future business opportunities between Asean and the United Kingdom to boost trade ties between Asean-member countries and the UK.

During her Bangkok visit, Baroness Neville-Rolfe met with Deputy Prime Minister Somkid Jatusripitak for the first time to discuss the current state of trade relations between the two kingdoms.

“It was my first meeting with Deputy Minister Somkid and we talked in general terms. I tried to build a relationship. He sees that I like Thailand and I also have ministerial and government experience. We talked about investment both ways. We talked about the EEC as we have an investment there. We talked about Thailand investing in the UK. It was positive. We talked about the Thai ownership of Leicester City, how to develop universities here, what to do about R&D, education, etc. Education that’s focused on the elite level where you’re opening English schools here is great. It’s also important to know how you train the workforce with that digital knowledge. By the end of the meeting, we left on good terms. We got promises to do further. I said I will come again,” she says.

She became a peer in 2013 and was Parliamentary Under-Secretary of State for Business and Minister for Intellectual Property from 2014-2016. She represented the UK on the Digital Single Market and in the EU Competitiveness Council. From 2016-2017 she was the Minister of State responsible for energy and then Commercial Secretary at the Treasury.

With an extensive business background, she believes that Asean and the UK stand to gain from developing further trade relations between either Thailand or Asean and the UK. Asean continues to thrive on its strengths. The market is strong and growing on the back of young populations, she says, while people are willing to learn new skills and work hard.

“We are keen on promoting development of trade between Asean and the UK. We have Jon Lambe, our ambassador to Asean based in Jakarta and Natalie Black, our Trade Commissioner for Asia-Pacific, based in Singapore. My council work with them in this region. My job is to make sure people from Asean such as delegations come to the UK. The idea is we can ease the conversation in London and other cities in the UK where there are links and there might be investment opportunities for Thailand and the other way around. We’ve lately got delegations from Brunei, Malaysia and Singapore coming to the UK.

“We want to deepen the trade we already have. If you look at our council, that tells you quite a lot. We have financial services, we have big investors like HSBC, Prudential, etc. I would say there are digital opportunities in our trade relationship. I’m sure it’s important for Thailand. You’ve got these different threads: education, skills, digital. All of these things are very good issues. We would like two-way tourism between UK and Thailand. Lots of Thais come to the UK for education, too.

“As I came from retail, there’s big investment here at the moment. And retail is being challenged by the digital change. I’m also interested in the EEC, which has the potential for overseas investors collaborating. Particularly opportunities for the UK will be in things like design, architecture and aerospace. We’ve got Rolls Royce,” says the Baroness.

While the current state of trade relations between Asean and the UK is good, the baroness hopes that relationship will remain “business as usual” in the post-Brexit UK.

“We have had three years of uncertainty. And to some extent, that uncertainty continues. As you know, a general election has been called. That’s because Boris Johnson came in and he said he’d do a Brexit deal and he has done a Brexit deal. But he hasn’t got through the parliament. So he has called an election which will take place in December. And clearly a lot depends on that generation election. But I hope we will get a clear majority. That will enable the deal that has been negotiated with the EU to go through the parliament in good order by 31st of January,” she says.

She adds that the new prime minister has strongly emphasised the importance of looking globally. “You know, our Foreign Secretary Dominic Raab came to visit Asean as his first stop since he was appointed. Asean is an important market. I am now chairman of the UK Asean Business Council. But I’ve taken on this job because I support the government in seeing a lot of potential of the Asean area including Thailand. British people love Thailand. I love Thailand.”

“Boris Johnson is standing on a platform to get the Brexit done. That’s why the election is happening. He wanted to get Brexit done by 31st of October. But he couldn’t get it done. We got a deal agreed for the EU, but it was not possible because of the complexity of our parliament. It was the parliamentary numbers to get the legislation through. So after a certain amount of coming and going, a election has been called. It now takes more time for the Brexit process to be completed and for the general election to be held. I hope there would be a clear majority. I would hope it would be the Conservative. But the talk in the papers over the last 24 hours has been that the Conservative and the Brexit Party will at least come together in some areas. My advice on the results: it’s very difficult for anybody to tell. Everything about Brexit is extremely difficult to predict over the last 3 years as you have seen,” she says.

Regardless of the next election’s results, the baroness believes that Asean will remain part of a global opportunity story.

“I think it’s strong. You might say EU is our priority because we need to conclude a free trade agreement with them with a certain timetable. And the existing trade with Europe is substantial. Clearly if agreement without tariffs be agreed, that will continue. Brexit has kept its focus on that. That’s why we’ve been focused on that. The US relationship is always important. But Asia has very much gone up in the eyes of Britain and British politicians in recent years,” she says with a grin.