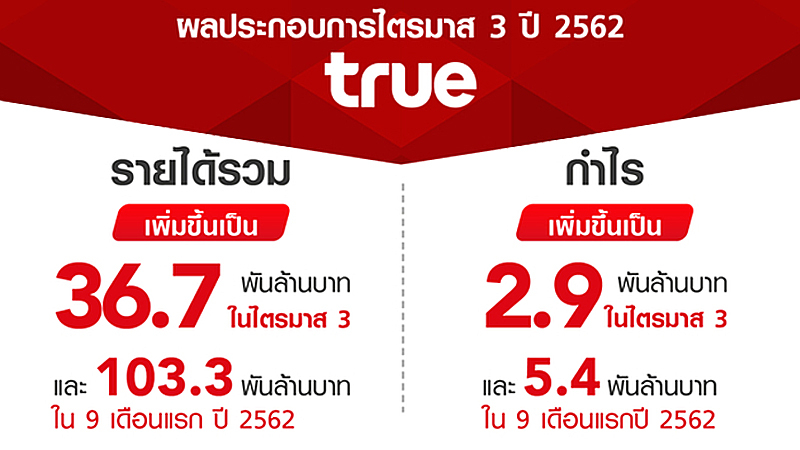 Telecommunications group True Corp has reported a net profit of Bt2.9 billion for the third quarter of 2019, up from Bt1.1 billion in the previous quarter and Bt99 million more than it netted in the same period last year.

The jump was attributed to an increase of Bt10.3 billion in earnings before interest, tax, depreciation and amortisation and a rise of Bt3.4 billion in operating profits.

It credited higher service revenue with above-industry subscriber growth in both the mobile and broadband segments, lower sales expenses and net benefit from asset sales to the Digital Telecommunications Infrastructure Fund in August.

TrueVisions’ exclusive broadcasting rights to English Premier League (EPL) matches on all platforms also boosted revenue, along with its platinum subscriptions and customer base. It added 4 million more customers by the end of the third quarter than it had in the second and 2.3 million more paying subscribers.

TrueVisions’ service revenue maintained a quarterly upward trend to Bt3.1 billion in Q3, underpinned mainly by growing revenue from major concerts, as well as sublicensing and sponsorship related to the EPL broadcasts.

TrueVisions said it would continue to diversify its portfolio and expand its revenue stream beyond traditional TV by sublicensing self-produced content to partners and utilising online “influencers” marketing to specific customer segments.