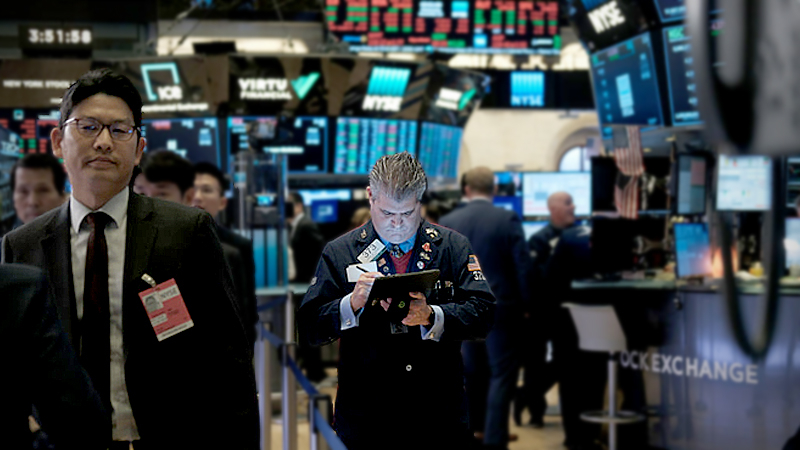 Stocks got off to a rocky December start on Monday amid disappointing manufacturing and construction data and renewed global trade tensions.

"All this trade friction is weighing on the manufacturing sector, reminding us that protectionism is not a victimless crime," said Kristina Hooper, chief global market strategist at Invesco.

Nine of 11 stock market sectors declined on Monday, with industrials, information technology and real estate leading the slide. All but seven of the Dow 30 blue chips finished in negative territory, with Boeing, American Express and United Technologies the biggest drags.

President Trump threw another curve ball into the trade picture Monday when he announced on Twitter that he would reinstate steel and aluminum tariffs on Brazil and Argentina. He accused the two nations of weakening their currencies to gain competitive advantage against the U.S., an oft-repeated rebuke that he's cited in his ongoing push for lower or even negative interest rates from the Federal Reserve.

"Brazil and Argentina have been presiding over a massive devaluation of their currencies. which is not good for our farmers," Trump said in Monday morning tweet. He then pivoted to the Federal Reserve, saying the central bank should "act so that countries, of which there are many, no longer take advantage of our strong dollar by further devaluing their currencies. This makes it very hard for our [manufacturers] & farmers to fairly export their goods. Lower Rates & Loosen - Fed!"

Stock futures had been trending up early Monday. Two surveys over the weekend showed that China's manufacturing sector rallied to an eight-month high in November, and European manufacturing data showed a better-than-expected easing in the sector's contraction. The strong data suggested that China's economy could be stabilizing after months of a brutal slowdown, quieting some fears about the trade war's toll on one of the world's most powerful economic engines.

But Trump's early morning announcement quickly cooled markets. By midday, all three market measures were in the red.

"The stock market's early gains in the futures markets melted away after the President's early morning tweet," said Chris Rupkey, chief financial economist of MUFG Union Bank, in a note.

Then came Monday's U.S. manufacturing report about a half-hour after trading began.

U.S. manufacturing disappointed in November, according to the Institute for Supply Management. Its manufacturing index dropped to 48.1% in November from 48.3% in October, coming in well below analyst expectations. Readings below 50% indicate business conditions are getting worse. Global trade "remains the most significant cross-industry issue," Timothy Fiore, chair of the ISM's manufacturing business survey committee, said in the report.

"With manufacturing being in deep trouble globally, today's PMI reading of 48.1 could mean that the sector won't avoid a recession, so the consumer economy would have to remain robust to sustain growth in the U.S.," Ken Berman, a strategist with Gorilla Trades, wrote in commentary Monday.

Also on Monday, the Commerce Department reported a downward revision in September construction spending that showed a 0.3% decline instead of the 0.5% surge as originally reported.

November was a blockbuster month for Wall Street, as strong earnings and trade hopes yielded 10 record-breaking closes for U.S. indexes. The Standard & Poor's 500 is still up nearly 25% for the year heading into a period that's typically high-performing for stocks.

December could also bring progress on the trade front, as the terms of an agreement by the United States, Mexico and Canada could be finalized, while resolution on the first phase of a trade deal with China continues to flit in and out of reach.

Last week, Trump said that negotiators were in "the final throes" of sorting out a trade deal with China that would bring the first phase of resolution in the 16-month conflict. But over the weekend, China's state-run newspaper, the Global Times, reported that negotiators are optimistic about a deal before the Lunar New Year in January, but that rollbacks of tariffs are essential if a deal is to be reached.

In an interview with Fox Business on Monday, Commerce Secretary Wilbur Ross said progress with China has been "one step forward, one step backward" and made it clear Trump was not looking to compromise on tariffs. Ross said Trump to move forward with the tariff increases slated for Dec. 15 if a phase one deal wasn't inked by then.

"That won't interfere with this year's Christmas. Nobody's reordering stuff after the 15th of December," Ross said. "Retailers have stocked up. So, it's a very good time, if we have to put more tariffs on."

When Trump announced the reinstated the steel and aluminum tariffs, he pointed to the strength of the markets as evidence that his hard-line trade policies weren't hurting the U.S. economy.

"U.S. markets are up as much as 21% since the announcement of Tariffs on 3/1/2018," Trump tweeted Monday. "And the U.S. is taking in massive amounts of money (and giving some to our farmers, who have been targeted by China)!"

On Friday, a top Mexican trade negotiator said that terms of a replacement for the North American Free Trade Agreement - one of the Trump administration's key goals - could be cemented early this week, fueling hopes that Congress could approve it before the end of 2019. The Trump administration reached an agreement with the governments in Canada and Mexico last year, but it must be approved by the House and the Senate before the changes can become official.

Trump's renewed tariffs on steel and aluminum dealt a surprise blow to one of Brazil's most crucial industries in a vulnerable moment for the economy, as unemployment hovers above 10% and growth continues to slow. Brazilian steel exports to the U.S. accounted for roughly $2.6 billion last year - making the U.S. one of Brazil's biggest markets for steel - and analysts expected the tariffs to be painful.

In Argentina, where steel and aluminum exports represent roughly $700 million, the unexpected news comes as the nation is undergoing a transition of power. If the tariffs persist, they will be one of the earliest diplomatic tests to face the incoming presidency of Alberto Fernández, a leftist politician who will take office within a week.

Before leaving the White House for a trip to a NATO gathering in London, Trump told reporters he had given Brazil and Argentina "a big break on tariffs, but now I'm taking that break off."

The flurry of potential trade activity is coalescing during what is typically a period of low volatility and high advances for stocks, said Sam Stovall, president of CFRA Research.

"Seasonal optimism typically gathers additional steam in the final month of the year as investors look to earnings projections for the coming year. Indeed, since 1945, the S&P 500 posted its best average return in December, along with the highest frequency of advance and lowest level of volatility," Stovall wrote in a note to investors Monday. "Trade relations, earnings estimates and valuations will likely influence trading this month, while the angle of ascent for U.S. economic growth, along with the presidential primaries, will garner additional attention as the new year progresses."